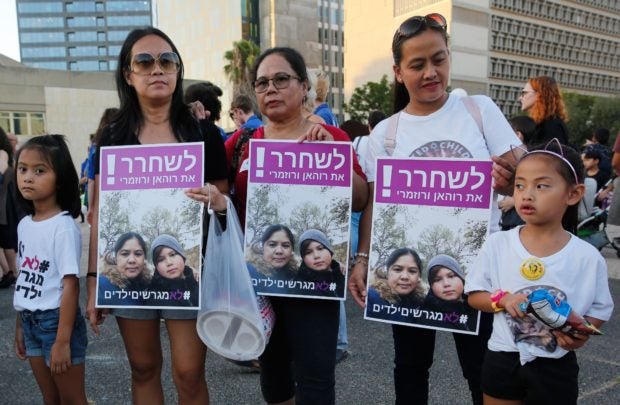 MIGRANTS’ PROTEST Filipino women migrant workers in Israel, together with their children, hold a demonstration in Tel Aviv on Aug. 6 against the detention of a Filipino mother and her son as shown on their protest posters. —AFP

MANILA, Philippines — The Embassy of Israel in Manila justified the deportation case of an “illegally staying” overseas Filipino worker (OFW), noting that it went through the scrutiny of its Supreme Court.

“In the recent case, the OFW was illegally staying in Israel for 12 years, after the expiration of her working visa. The case was scrutinized by the Supreme Court of Israel, and has been approved,” it said in a statement on Tuesday.

According to Agence France-Presse (AFP), immigration officers arrested Rosemarie Perez and her 13-year-old son for remaining in the country illegally.

They were brought to Ben Gurion airport near Tel Aviv Sunday night but later taken off the plane, AFP’s report added.

Carmel Bensur, the lawyer for the family, told AFP that she has requested an urgent hearing on their status in a bid to have them remain in Israel.

The embassy cited that under Israeli law, a foreign worker is allowed to live and work in Israel for up to 5 years.

“It is expected from every foreign worker to abide by the law and to leave the country upon the expiration of his working permit,” it added.

The embassy, meanwhile, expressed appreciation over the “contribution of [OFWs] who have been staying and living in Israel for so many years.”

“The government of Israel attaches a great significance to the working conditions of the Filipino workers and it was demonstrated by the signing the historical bilateral labor agreement between the two countries which intends to improve the rights of the OFWs and dramatically reduce the placement fees,” it added.

Perez is only one of some 100 Filipino mothers facing deportation for failing to renew their working permits when they gave birth in Israel, leaving them with no legal status.

“Driven by humanitarian considerations, Population Immigration and Border Authority (PIBA) allows the children of the overstaying workers who are enrolled in schools to stay in the country until the end of the school year in Israel, at the end of June,” the embassy’s statement further read.