Philippines can seek US assistance in monitoring EEZ – Panelo

MANILA, Philippines – Presidential Spokesperson Salvador Panelo on Sunday said there is nothing wrong with seeking assistance from the United States in monitoring the country’s exclusive economic zone (EEZ).

Panelo said this amid recent reports of Chinese ships sailing unannounced into Philippine waters—including the two Chinese survey ships that were spotted within the country’s EEZ in the West Philippine Sea. 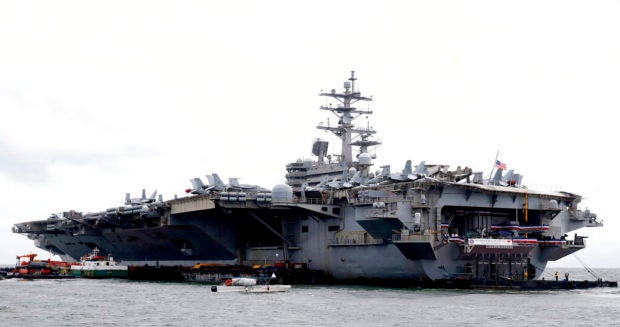 The U.S. aircraft carrier USS Ronald Reagan is anchored off Manila Bay, Philippine, for a port call Wednesday, Aug. 7, 2019. The USS Ronald Reagan is cruising in international waters in the South China Sea amid tensions in the disputed islands, shoals and reefs between China and other claimant-countries, including the Philippines, Vietnam and Malaysia. (AP Photo/Bullit Marquez)

Defense Secretary Delfin Lorenzana earlier admitted that the country is not as adequately capable of monitoring ships entering the country’s territory, unlike the United States.

READ: Defense chief on Chinese ships: Why the secrecy?

Panelo said the government would not have filed a diplomatic protest if the Chinese survey ships had permission to push through with their activity.

In a text message to INQUIRER.net, Lorenzana said that US-based think tank Asia Maritime Transparency Initiative (AMTI), among others, is already providing images of vessels spotted within the country’s EEZ.

“Most of the time other agencies such as AMTI which has access to these photos publish them first. Kaya reactive na lang tayo,” Lorenzana said.

Lorenzana also echoed Panelo’s comment on seeing no issues with seeking help from the US government in monitoring the country’s EEZ.

Panelo also welcomed the proposal to put up a detachment in the country’s second northernmost island group, Fuga Island.