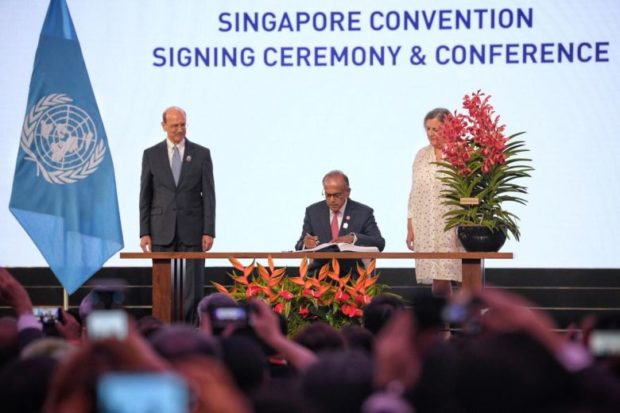 SINGAPORE — Forty-six countries signed the Singapore Convention on Mediation on Wednesday (Aug 7) – the day it opened for signatures.

The United States and China were among the first signatories of the treaty – also known as the United Nations (UN) Convention on International Settlement Agreements Resulting from Mediation – which will provide for the enforcement of mediated settlement agreements across countries.

Singapore was the first to put ink to paper for the treaty, as represented by Law and Home Affairs Minister K. Shanmugam.

States that have signed and ratified the treaty will have to ensure that international commercial settlement agreements are enforced by their courts.

Currently, mediated settlement agreements – which are the result of mediation negotiations between at least two commercial parties in a dispute – cannot be enforced across country borders.

The courts of signatory countries are expected to handle applications – either to enforce such settlement agreements, or to allow a party to invoke the agreement to prove that the matter has already been resolved.

The treaty will come into effect once at least three countries have ratified it.

Last week, 20 countries indicated their intention to sign the treaty.

Ministers and senior officials from 70 countries attended the signing ceremony and conference at Shangri-La Hotel on Wednesday, in a show of support for the new convention.

Singapore was recommended to host the signing by the UN Commission on International Trade Law (UNCITRAL).

Singapore had played a key role in the negotiations and drafting of the treaty, said Mr Shanmugam.

The chairman of the working group that negotiated the treaty – Mrs Natalie Morris-Sharma – is a Singaporean, and a Singapore delegation took active part in the negotiations.

Singapore authorities hope the convention will put Singapore on the world map when it comes to mediation.

During the ceremony, Singapore also signed a Memorandum of Understanding with the UN for the building of a UNCITRAL Academy here, which will organize future installments of the Singapore Convention Conference, among other things.

The next such conference has been planned for Sept 1 next year.

More than 1,500 delegates from around the world will participate in this year’s convention and other related events.