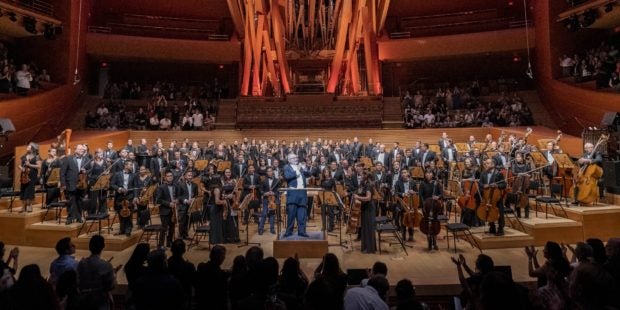 Performing at the iconic venue — one of the most sophisticated in the world and known for its legendary acoustics —
was pivotal for Faso, the only Filipino symphony orchestra outside the Philippines.

“It was a dream come true,” said Louie Ramos, Faso vice president and one of the show’s arrangers. “It’s the first time Filipino music reverberated within the walls of the concert hall. It brought a strong sense of pride for Filipinos.”

“For many musicians, the ultimate dream is to perform at Carnegie Hall or Lincoln Center for the Performing Arts on the East Coast. Here on the West Coast, it’s the Disney Concert Hall,” said Arlene Ferrolino, Faso board president and a music educator for more than 30 years.

The 78-member orchestra, led by accomplished conductor and musical director Robert “Bob” Shroder, and its guests performed with uplifting energy that matched the exuberance of the concert hall’s design and architecture. Architect Frank Gehry’s gleaming masterpiece of curved stainless steel in the heart of downtown Los Angeles, the Walt Disney Concert Hall has become one of the city’s landmarks and premier cultural destinations.

Titled “A Summer Symphony with Faso,” the show dazzled the audience with an eclectic repertoire that included classical masterpieces – “Summer” from the Four Seasons (Antonio Vivaldi) and “Die Fledermaus Overture” (Johan Strauss) – and memorable music from the film “Gladiator” (Hans Zimmer).

Seven-year-old Brycen Taylor Hall, who topped Faso’s talent auditions for the summer concert, made his major stage performance debut. He sang with his parents, Deedee Magno Hall and Cliffton Hall, both acclaimed talents in such musicals as “Miss Saigon,” “Wicked” and “Next to Normal.”

One of the concert highlights was the medley of Filipino lullabies from various regions in the Philippines, performed by Faso Kids. “These songs are very near and dear to our hearts. We heard our mothers sing these melodies to us and we pass these musical pieces down to our children as we sing the songs to them,” said Ramos, who created the medley.

“We are so proud of these amazing kids,” he said. “Would you believe that none of them had touched a violin before they joined the program less than a year ago?”

Faso, which promotes the rich artistic and cultural traditions of the Philippines, is most proud of its music education and outreach program for children, Shroder said.

“We provide opportunities for children, especially those in underserved communities, to learn about our rich music traditions and develop their musical abilities,” he said. “We offer them a chance to reach their full musical potential and share their talent with their communities.”

The education program inspires the Faso board, led by Ferrolino, to continue dealing with the orchestra’s biggest challenge: funding.

“It makes us proud to see the joy on the faces of the kids and the twinkle in the eye of their parents as they learn and improve their talents in singing or playing an instrument,” said Ferrolino, who has kept the operations running efficiently behind the scenes—from fundraising and applying for grants to marketing and publicity.

The orchestra marked its 10th year in 2018, “and we wanted to start off our second decade with a bang, so here we are,” she said.

Faso board member Ruben Nepales described the historic debut at the Disney Concert Hall as a milestone for the nonprofit led by volunteers “who do it simply for the love of Faso and its mission and vision.”

“We hope it would stay as a long-lasting institution that would serve future generations of Filipino-Americans,” Nepales said.