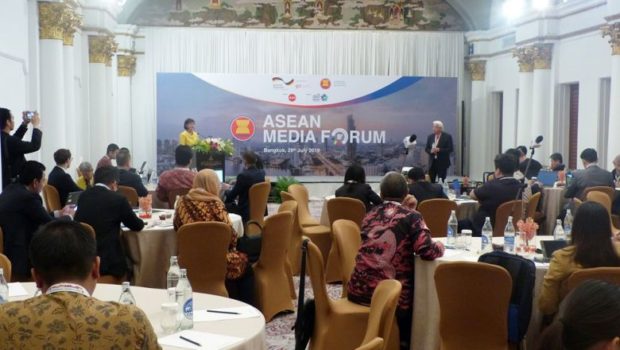 The 3rd Asean Media Forum met to discuss the challenges facing Asean, as well as its aims and achievements at both the international and regional levels. Photo by Long Kimmarita / The Phnom Penh Post/Asia News Network

PHNOM PENH — Some 30 media leaders and noted bloggers from the 10 Asean member countries gathered for talks with the region’s thought leaders in Thai capital Bangkok on Monday on how the bloc responds to global challenges.

The 3rd Asean Media Forum met to discuss the challenges facing Asean, as well as its aims and achievements at both the international and regional levels.

The talks focused on how Asean responds to global challenges, especially Sino-US trade tensions, with the issue being viewed as greatly affecting countries in the region.

Has Sohpak, the deputy director of the Ministry of Information’s General Department of Administration and Finance, said the forum was important as all parties could raise numerous issues, particularly the major global challenges affecting the region’s smaller nations.

“Generally, countries in Asean, including Cambodia, are not big, but we have a voice. The forum serves as a space where the issues

Cambodia is facing can be communicated to Asean. We will also look at the issues currently affecting Asean, Cambodia and the globe,” Sohpak said.

Asean secretary-general Lim Jock Hoi said the media had played a crucial role in the regional integration process. The participating media leaders could share the positive messages of Asean to the region and the world.

“We hope that through the Asean Media Forum, media leaders would be in a better position to convey the Asean story to the people on the ground as we bring the bloc closer to its citizens,” Yoong Yoong said.

Those who attended also discussed the Asean business sector’s view on the China-US trade spat, as well as being updated on regional economic

Next year’s Asean Media Forum is to be held in Vietnam.