Filipina nabbed with 5.9 kg of shabu in Kota Kinabalu; could face death penalty 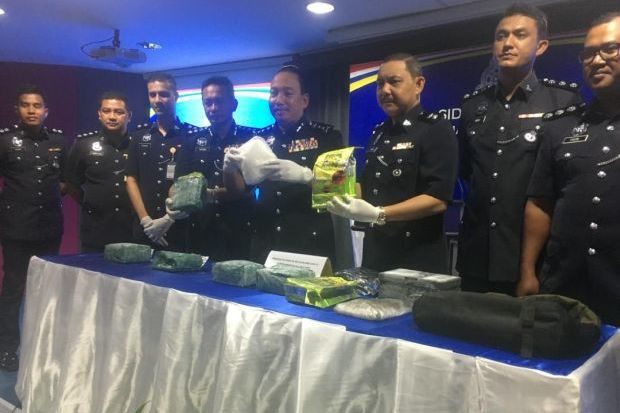 (Fourth from right) Zaini with senior police officials and the seized drugs.

KOTA KINABALU — A woman from the Philippines could face the death sentence after she was nabbed for allegedly trafficking over 5.9 kg of shabu at a house in Manggatal in Sabah, Malaysia.

Sabah deputy police commissioner Datuk Zaini Jass said the 32-year-old was nabbed during a raid at about 12:12 am on Tuesday (July 23).

“During the raid, policemen found the items kept in several bags and packages in the kitchen,” he said at a press conference here on Wednesday (July 24).

He said most of the drugs were stored in tea packets and added that the investigation also uncovered another 5.4 kg of drugs from a car.

Zaini said the seized drugs belonged to a man that has yet to be arrested and are worth about RM275,000 (P3.4 million), adding that the drugs found were meant for sale locally.

“We are hoping to trace the man and main supplier as soon as possible,” he said.

Zaini said the suspect is being remanded until July 29 and she will be investigated under Section 39B of the Dangerous Drugs Act 1952.