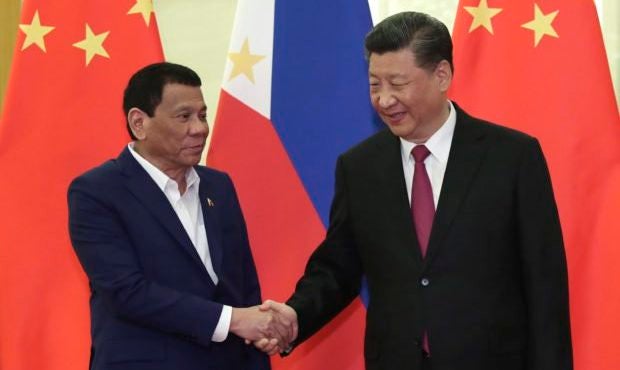 MANILA, Philippines — While facing increasing pressure to revisit his West Philippine Sea policy in his own country, President Rodrigo Duterte has earned praises in the opinion section of a state-published newspaper in China.

In the article which saw print in the Global Times, a newspaper published by the ruling Communist Party’s People’s Daily, columnist Li Qinqing recalled parts of the President’s State of Nation Address where Duterte said he does not want the sea dispute to lead to war and defended his verbal fishing deal that allows Chinese fishermen to fish in waters within the Philippines’ exclusive economic zone.

The Global Times is widely regarded by foreign media as the “voice” of Beijing and it is believed to reflect what officials are thinking but could not say directly.

“Why did Duterte persist in acting in a peaceful, cooperative and restrained way in the South China Sea despite some domestic criticism and US instigation? Because Duterte has realized that putting disputes aside and seeking cooperation with China brings most benefits to his country,” Li wrote in Global Times’ Observer section on Tuesday.

“Through cooperative development, China and the Philippines are making an effort to ease tensions in the region and explore a new path of regional cooperation,” Li added.

Back in the Philippines, Duterte’s stance on the West Philippine Sea has been constantly criticized for appearing to be too accommodating to China.

When he became President in 2016, he pursued closer ties with China in exchange of economic deals and investments. He also set aside the Philippines’ legal victory against Beijing, which rejected China’s massive claims in the South China Sea.

Rather than “hyping” the dispute and “badmouthing” China, Li said concerned nations should focus on “joint development” if they wish for less tensions in the South China Sea.

“Some countries concerned, even countries outside the region, are very sensitive about China’s movements in the South China Sea. These countries over-interpret China’s decisions, accuse China of ‘bullying,’ and even sow dissension among countries in the region to benefit from it,” Li wrote.

Li said the cooperation between Philippines and China should serve as a model in the region. He cited the joint statement of the two countries in 2018 where both said: “Both sides agree to exercise self-restraint in the conduct of activities in the South China Sea that would complicate or escalate disputes and affect peace and stability.”

The columnist also mentioned the memorandum of understanding on oil and gas development cooperation signed by the two countries in 2018.

“Such a joint development with China in the South China Sea not only eases Manila’s pressure of imports, but also reduces its over-reliance on the international energy market. Such cooperation also improves the Philippines’ energy structure and will greatly benefit the country in the long run. Instead of struggling with disputes, doesn’t such win-win cooperation bring greater advantage to both sides?” Li wrote.

The columnist said that nations concerned can only benefit if they work together toward cooperative development.

Despite praises for the current Philippines-China relationship and interest to promote stability in the region, it appears China remains firm that they own almost the entire South China Sea through its nine-dash line claim, which is not recognized by international law and had already been invalidated by a United Nations-backed arbitration court in 2016.

“China continues to restrain itself on the South China Sea issue. Otherwise, China could have already used coercive measures to take back all the islands illegally occupied by other countries,” Li wrote.

“But this does not mean China is a pushover. China is determined to safeguard its national sovereignty, and also has the goodwill to maintain peace and promote cooperation in the South China Sea.”  /muf