China not in possession of sea but in position, says Esperon | Global News
Close
menu
search

China not in possession of sea but in position, says Esperon 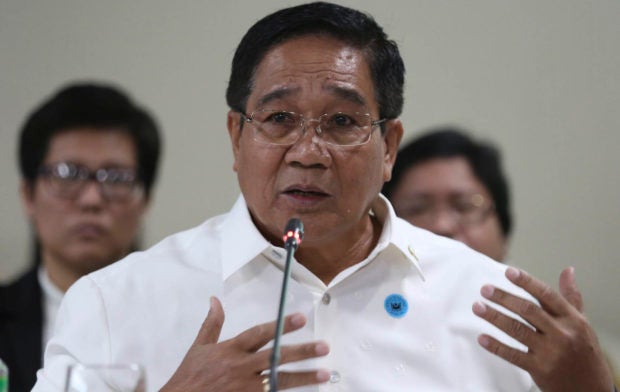 MANILA, Philippines — National Security Adviser Hermogenes Esperon Jr. on Tuesday denied that China is “in possession” of the West Philippine Sea, as President Rodrigo Duterte claimed in his State of the Nation address to a joint session of Congress on Monday.

West Philippine Sea is the local name of the waters within the Philippines’ 370-kilometer exclusive economic zone (EEZ) in the South China Sea, nearly all of which China claims.

Esperon, a former military chief of staff, said China was just “in position,” as it had established a presence in parts of the South China Sea claimed by its smaller neighbors in the region.

Besides the Philippines, Brunei, Malaysia, Taiwan and Vietnam also have competing claims in the South China Sea.

He said China’s militarization in the South China Sea from 2012 to 2016 enabled it to take “positional advantage” over its rivals for territory in the strategic waterway.

“Admittedly, China has built islands, artificial islands, in the West Philippine Sea and in the South China Sea starting from 2012 to 2016 and up to now. But the construction of islands there were completed as of 2016, so they are in position in such islands,” Esperon said.

“They have the positional advantage right now and they have the equipment to reinforce their position, so what is our answer there? Our response is to also strengthen our position,” he said.

Defense Secretary Delfin Lorenzana agreed with Esperon, noting that President Duterte could be just referring to Panatag Shoal, internationally known as Scarborough Shoal, when he said China was “in possession” of the West Philippine Sea.

“They are in position on their islands, but they are not in possession of the West Philippine Sea because we are also claiming it,” Lorenzana said.

Presidential spokesperson Salvador Panelo, however, said what the President said was that China was “in possession” of the West Philippine Sea and that as far as he was concerned, China owned those waters.

“Maybe it’s the pronunciation. Possession. And his position is, ‘as far as I’m concerned, they own that,’” Panelo told reporters.

According to a Palace transcript of the 2019 State of the Nation, the President said: “China also claims the property and he is in possession. That is the problem. They are in possession and claiming all the resources there as an owner.”

Panelo said China’s military presence in the South China Sea showed that it was in possession of the heavily disputed waterway.

Supreme Court Senior Associate Justice Antonio Carpio, who has done an extensive study of the territorial dispute between the Philippines and China in the South China Sea, also challenged the President’s claim that China was in possession of the West Philippine Sea.

“China is in possession of seven features in the Spratlys plus Scarborough Shoal. In addition, during the Duterte administration, China seized Sandy Cay from the Philippines. The total area of these geologic features, including their territorial seas [if any], is less than 7 percent of the West Philippine Sea,” Carpio said in a television interview on Tuesday.

Carpio, part of the legal team that successfully argued the Philippines’ challenge to China’s sweeping claim in the UN-backed Permanent Court of Arbitration in The Hague, said the regular freedom of navigation operations and naval drills of the United States, United Kingdom, France, Australia, Japan and Canada in the South China Sea also “demonstrate that China is not in possession of the West Philippine Sea.”

But Panelo insisted that China was in possession of the West Philippine Sea.

“When you’re in possession, do you only possess one portion? If you have military installations there, in other words you are showing that you can guard the entire area. It means they are in possession,” he said.

Carpio, in his television interview, said the Senate could either ratify or reject the Pr’s supposed verbal agreement with Chinese President Xi Jinping allowing the Chinese to fish in the West Philippine Sea and the Filipinos to fish at Panatag Shoal, a traditional fishing ground in those waters that belonged to no particular country but that China seized in 2012.

“The Senate has to act now and either ratify or repudiate that fishing agreement. If you allow China to fish, that is a treaty or international agreement and that requires concurrence of the Senate,” Carpio said.

The Senate owes it to the public to find out if the President struck a “fair agreement” with Xi, Carpio said, stressing that foreign nations may be allowed by agreement to fish in one another’s EEZ but only if there is a “surplus.”

“If the Chinese are allowed to fish in the West Philippine Sea, they will take all the fish because they have a huge fishing fleet, the largest in the world,” Carpio said, adding that China has about 200,000 large motorized fishing vessels.

“They can scoop the fish there in less than a year. And the fish will be gone, it would be depleted. And we cannot compete with China because we have small bancas, wooden boats,” he said.

The absence of an “official resistance” from the Duterte administration would have a long-lasting impact on the Philippines’ footing in asserting its sovereignty and sovereign rights in the West Philippine Sea, Jay Batongbacal, director of the University of the Philippines’ Institute for Maritime Affairs and Law of the Sea, said on Tuesday.

“He still does not understand that the point of critics is not to go to war, but rather come up with a better and stronger negotiating strategy and position in dealing with China, instead of simply acquiescing to everything that China wants,” Batongbacal said.—Reports from Darryl John Esguerra, Julie M. Aurelio, Dona Z. Pazzibugan, Christia Marie Ramos and Jhesset O. Enano