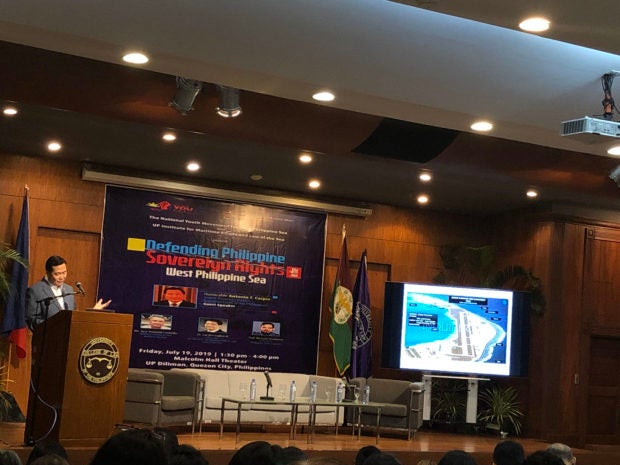 The senior magistrate, who was the guest speaker at a forum hosted by the National Youth Movement for the West Philippine Sea and UP Institute for Maritime Affairs and Law of the Sea, said the President’s recent confirmation of the verbal agreement only shows the Senate should finally intervene.

Duterte claimed early this month that he had struck a deal with Xi in 2016 allowing Chinese fishermen to have access within the Philippines’ 200-nautical mile exclusive economic zone.

This became a source of debate on whether the deal was legally binding. But Duterte’s confirmation of the deal in his interview with Pastor Quiboloy aired on Wednesday meant it was binding, Carpio said.

“It’s (verbal agreement) against our Constitution that says the EEZ is exclusively for Filipinos. So I think the Senate will not ratify it because it’s purely against the Constitution,” he said.

Carpio said the Senate should find out more details about the agreement through the Secretary of Foreign Affairs.

‘They can scoop all the fish’

He also warned that the Chinese fishermen could deplete the resources in the West Philippine Sea because of the verbal agreement.

“They have the largest fishing fleet in the world with over 220,000 motorized fishing vessels. They can scoop all the fish there in less than one year,” he said.

“It’s so lopsided that the Senate would not approve it. So the ball now is in the court of the Senate,” he said./ac