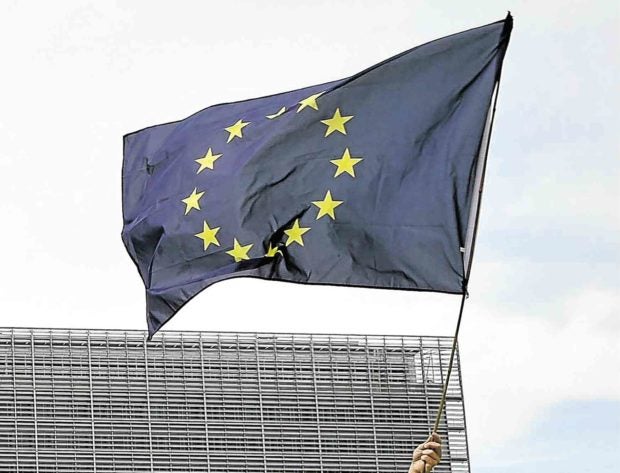 CONSTRUCTIVE WAY FORWARD The European Union on Saturday said the first-ever UN Human Rights Council resolution on the Philippines was a constructive way to promote and protect human rights in the country amid President Duterte’s brutal war on drugs. —AFP

The 28-nation European bloc said the first-ever resolution on the Philippines by the UNHRC was a “constructive way forward” for the United Nations’ highest human rights body to know more about the brutal antinarcotics campaign.

Human rights groups say up to 27,000 people have been killed in the three-year-old campaign, but the Philippine National Police says the number is only 6,600.

“The European Union welcomes the fact that the Human Rights Council is able to respond to and address situations of concern raised by the UN High Commissioner for Human Rights and Special Procedures of the Council,” it said in a statement on Saturday.

“We commend the main sponsor for their constructive approach toward a balanced resolution with the main aim of requesting a report by High Commissioner and an enhanced interactive dialogue in the Council, which we think is a constructive way forward for the Council to be further informed about the promotion and protection of human rights in the Philippines,” the European Union said.

The President’s legal adviser and spokesperson Salvador Panelo has condemned the resolution, saying it was based on “false information and unverified facts and figures.”

He said the resolution authored by Iceland was “grotesquely one-sided, outrageously narrow and maliciously partisan,” and disrespected the country’s sovereignty.

In a meeting in Geneva, Switzerland, on Thursday, the UNHRC voted 18-14 with 15 abstentions to pass the resolution requesting UN High Commissioner for Human Rights Michelle Bachelet to prepare a comprehensive report on the Philippine situation.

The council expressed concern over allegations of killings, enforced disappearances, arbitrary arrest and detention, attacks against activists, human rights defenders, journalists, lawyers and the political opposition, and assaults on freedom of expression.

The resolution also called on the Philippine government to take “all necessary measures” to prevent extrajudicial killings and enforced disappearances, and to investigate them and then hold perpetrators accountable.

It urged the Duterte administration to cooperate with UN agencies by allowing visits to the country by their representatives without intimidation or retaliation.

“The EU has repeatedly reiterated its concerns on the human rights situation in the Philippines, including the high death toll and the severe conditions in detention associated with the campaign against illegal drugs. The EU has called for prompt, effective, impartial and transparent investigations of all cases of death,” the EU statement said.

In a barrage of tweets since Thursday, Foreign Secretary Teodoro Locsin Jr. bristled at countries that approved the resolution, saying they had insulted the Philippines. He threatened them with unspecified far-reaching “consequences.”

“Any probe resulting from the narrow vote for Iceland resolution will not be allowed into the Philippines. I have long wanted international cooperation on the drug war, eg. USDEA, Russia. Never from people who don’t shower at least once daily & likely on cartel payroll. Period,” he tweeted on Friday. “And that’s fucking final.”

Sen. Richard Gordon on Saturday said the government had the right to bar the entry of  international probers into the country, and Sen. Imee Marcos urged Mr. Duterte to cut diplomatic ties with Iceland.

“A strong statement is in order that the values and political agenda of other countries, many of them developed countries like Iceland, cannot be imposed on an independent country like the Philippines,” said the daughter of dictator Ferdinand Marcos.

Panelo said the resolution was invalid because it was approved by a minority, but Bayan Muna party list chair Neri Colmenares said that premise could be used against Mr. Duterte.

“If there are more votes for yes than those who voted no, the legal rule is the yes have it,” Colmenares said.

Following the two officials’ contention would mean that Mr. Duterte “was not a valid President because his 16 million votes out of more than 50 million Filipino voters means that more that 30 million did not vote for him,” he said. —With reports from Leila B. Salaverria and Melvin Gascon