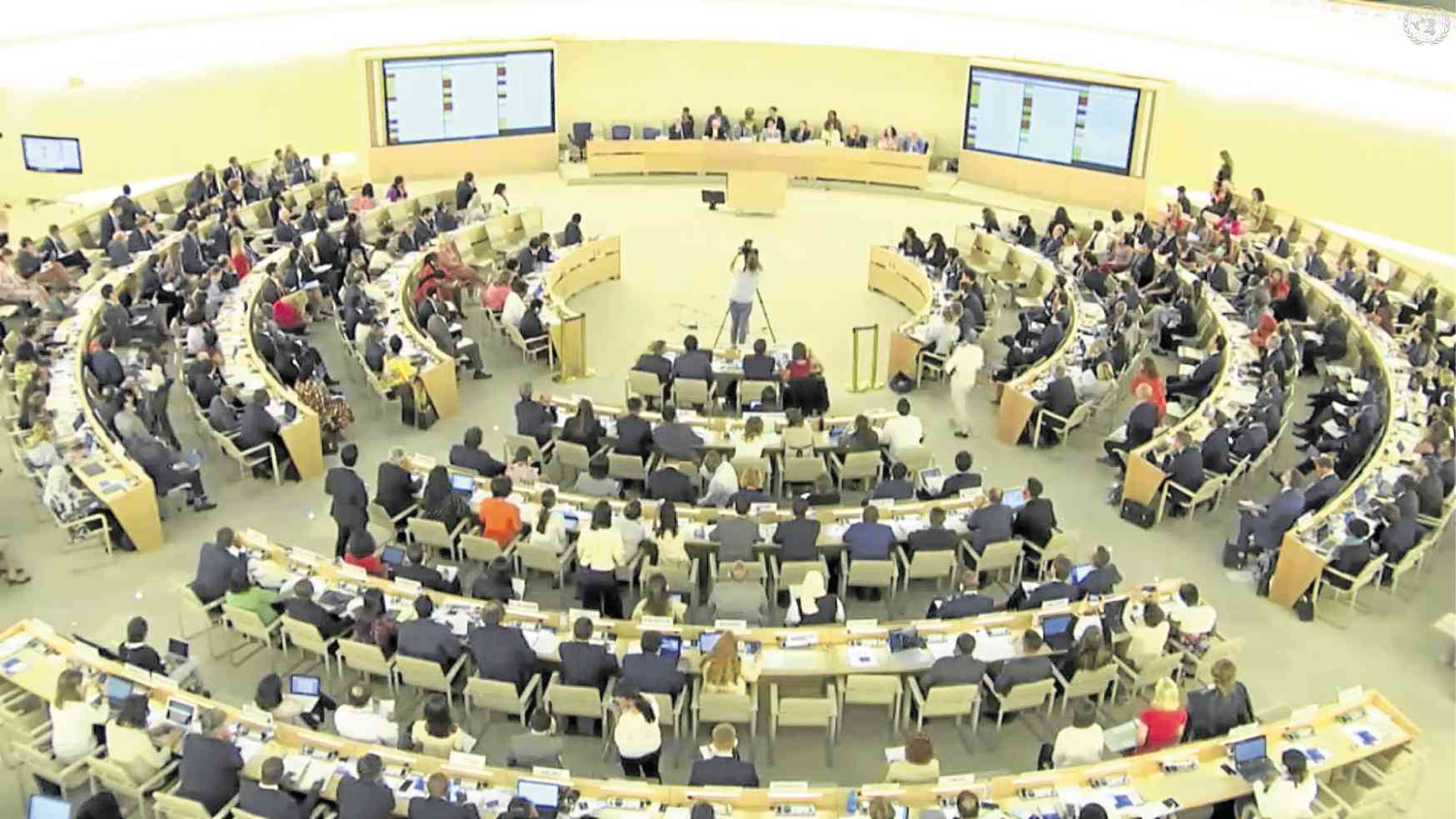 ON WITH THE PROBE The UN Human Rights Council in Geneva, Switzerland, on Thursday votes 18-14, with 15 abstentions, adopting a resolution to review the human rights situation in the Philippines and urge the Duterte government to conduct impartial investigations of rights abuses. —UN.ORG

The UN Human Rights Council on Thursday adopted a resolution to prepare a “comprehensive” international report on the human rights situation in the Philippines, falling short of an actual international investigation of abuses, particularly in the conduct of President Duterte’s war on drugs.

It also called on the government to cooperate with the Office of the United Nations High Commissioner for Human Rights, including “facilitating country visits and preventing and refraining from all acts of intimidation or retaliation” on human rights defenders.

During the council’s 41st session in Geneva, 18 countries voted for the resolution that was proposed by Iceland last week. Fourteen nations rejected it, including the Philippines and China, while 15 abstained.

Foreign Secretary Teodoro Locsin Jr. slammed the vote, saying the resolution was based on false information and the ill will of the few.

“[The Philippines], in good conscience, cannot abide by it,” Locsin said in a statement, which was read by Permanent Representative to Geneva Evan Garcia. “We cannot accept a politically partisan and one-sided resolution, so detached from the truth on the ground.”

“We renew our solidarity with our true friends who have stood by us in this farce. But we will not tolerate any form of disrespect … There will be consequences; far-reaching ones,” he said.

Before the vote on the resolution was taken, Duterte was noncommittal when he responded to reporters’ questions about allowing UN rights investigators to visit the Philippines. “Let them state their purpose and I will review it,” he said.

Among the countries that openly expressed their support for the resolution aside from Iceland were Peru and Uruguay. Several European countries also supported the resolution, including the United Kingdom, Spain, Denmark and Italy.

Iceland stressed that it did not seek confrontation when it proposed the resolution, recalling the numerous times that it had expressed serious concern over the drug killings while maintaining dialogue with the Philippine government.

The states that voted against the adoption included Bahrain, Egypt, Iraq, Qatar and Saudi Arabia.

China expressed its “positive evaluation” of the policies of the Duterte administration, saying it supported Manila’s antidrug campaign.

It echoed the Philippines’ position that the move was a mere politicization of the human rights issue that would “poison” the atmosphere of dialogue and cooperation within the council. 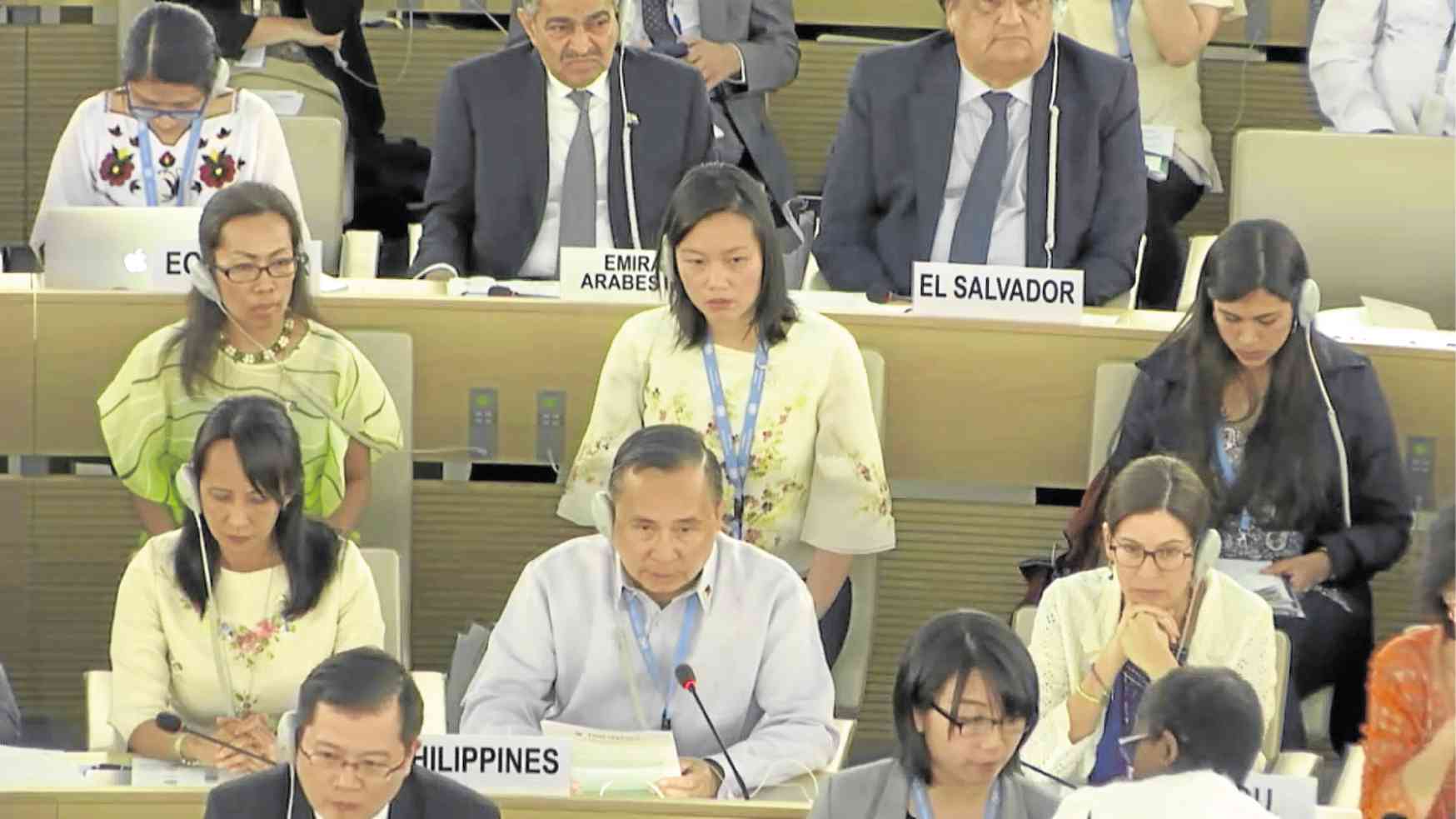 Japan, which abstained, underscored that the high popularity that Duterte enjoyed supposedly reflected the Filipinos’ understanding of his policies, including his drug war.

Rights groups lauded the vote, saying it signaled the beginning of accountability for the thousands of killings and abuses in the drug war.

Citing the “massive campaign” reportedly done by the Philippine delegation to block the vote, the adoption of the resolution came as a surprise, said Amnesty International Philippines.

“This is just the start of possibly a painful but hopefully unobstructed and genuine process to attain justice,” said Butch Olano, Amnesty’s Philippine section director.

New York-based Human Rights Watch said the resolution was a “modest but vital measure,” especially in the face of a disinformation campaign the government reportedly launched against Iceland and those that supported the resolution.

“Countries determined to address the human rights crisis in the Philippines prevailed in the face of Manila’s ultimately counterproductive efforts to shield itself from scrutiny,” said Laila Matar, HRW deputy Geneva director.

With the vote, the Duterte administration must not only toe the line of civility and humanity, but should rectify a lot of wrongs, said Edre Olalia, president of the National Union of Peoples’ Lawyers.

“It is an initial benchmark victory of sorts in the long and arduous search for justice and brings a ray of hope that sooner or later the rampant extrajudicial killings will stop and that impunity will eventually cease to reign,” he said.

Following the adoption, the groups urged the Philippine government to cooperate with the international community.

“The Philippines was once a beacon of democracy and freedom in Asia,” said Ellecer Carlos, spokesperson for the In Defense of Human Rights and Dignity Movement. “It is time to start walking in that direction once again.”

The resolution faced strong pushback from the Duterte government, which said the drug war death toll of 27,000 being mentioned by international human rights groups was bloated, citing the official figure of around 6,500 people who had been killed, mostly for violently resisting arrest.

Presidential spokesperson Salvador Panelo challenged Amnesty International, which has been citing the high figure to name all the victims.

He also said the opposition candidates in last May’s midterm elections “foisted the lie on the drive against prohibited drugs.”

“Their mask of righteousness has been ripped apart” by their defeat at the polls, he said. —WITH A REPORT FROM JULIE M. AURELIO

Read Next
Locsin warns of ‘far-reaching consequences’ for nations in favor of UN resolution
EDITORS' PICK
PH preps for China virus: Question of when, not if
Museums ‘put to sleep,’ churches closed amid volcano’s unrest
Beyond water service: Maynilad builds massive infrastructure projects to clean up Metro Manila waterways
Get exciting deals and discounts when you download the new McDonald’s App
Seventh judge assigned to handle De Lima case
SM continues to send relief assistance to remote towns in Batangas
MOST READ
Lacson on Duterte’s threat to end VFA over Bato’s canceled visa: Where is the connection?
Part of Aurora Boulevard in Cubao closed from Jan. 25 – Feb. 1
The humiliating experience that changed Nash’s perception of soldiers
Corruption worsens: PH falls 14 notches to 113th spot in global index 2019
Don't miss out on the latest news and information.