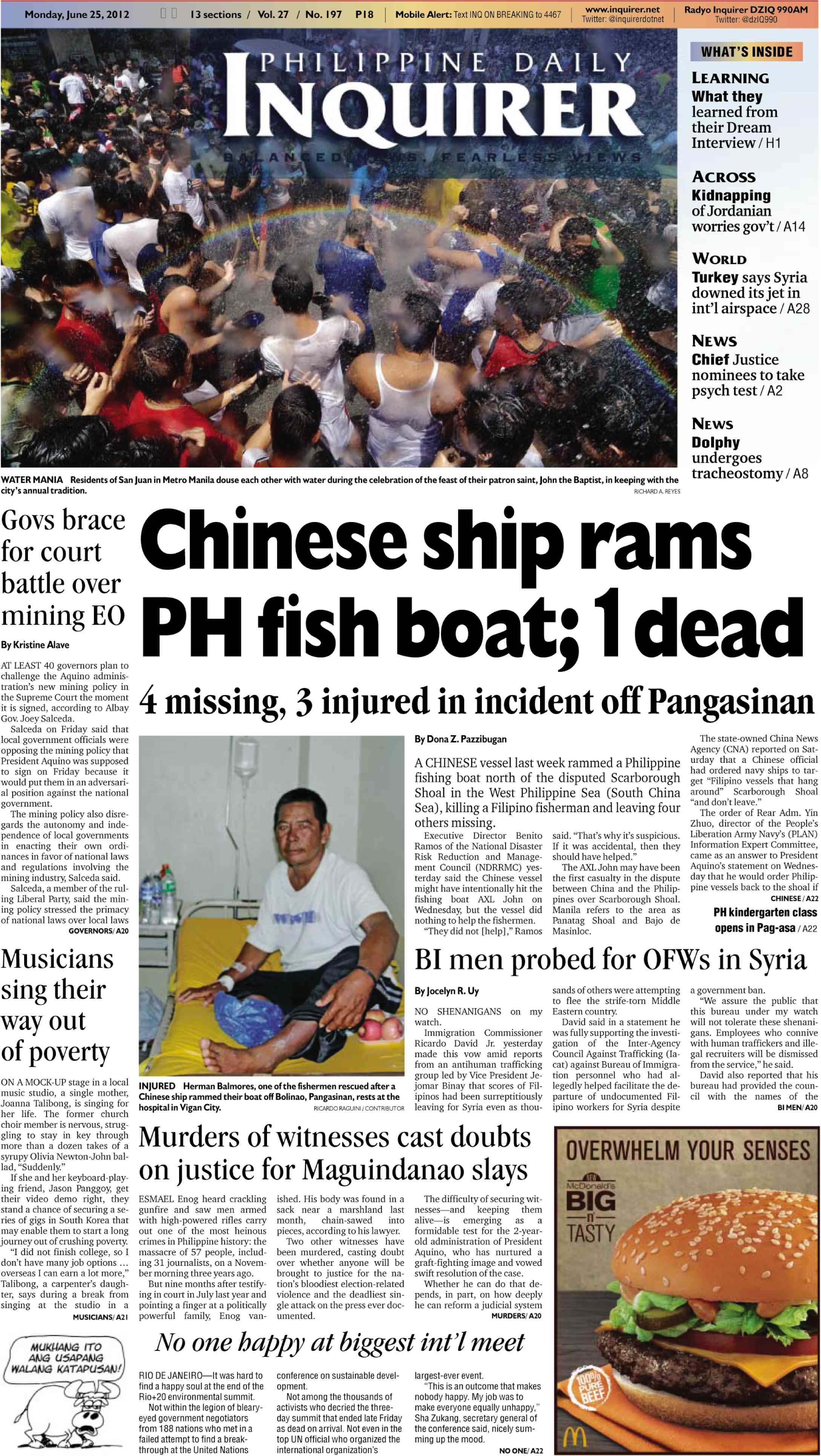 FLASHBACK Like the June 9 sinking of a Philippine fishing boat after being hit by a Chinese trawler at Recto Bank in the South China Sea, the June 18, 2012, hit-and-run in the waters off Bolinao, Pangasinan province, made front-page news.

DAGUPAN CITY—Gasping for air and shivering in the cold water, eight Filipino fishermen struggled to stay afloat after their boat was rammed by a Chinese vessel.

Strong winds and towering waves dashed their hopes of surviving as the foreign vessel slowly sailed away, abandoning them in the open sea.

But this incident, almost similar to the sinking of a Philippine fishing boat at Recto Bank, off Palawan Island, on the night of June 9, happened seven years ago near Panatag Shoal, off the coast of Zambales province, and in broad daylight.

The fishermen, the crew of the fishing boat Axl John from Pangasinan province, drifted at sea for four days until some of them were rescued by other fishing boats.

Unlike the crew of the Gem-Ver 1 in the Recto Bank incident who all survived after their boat was hit and sunk by a Chinese trawler, only three crew members of the Axl John lived to tell their ordeal on June 18, 2012.

A crew member died in the hospital. Four others are still missing.

The incident happened north of Panatag Shoal, which China seized after a two-month maritime standoff with the Philippines that year.

Without military muscle to retake the shoal, the Philippines challenged China’s claim to nearly the entire South China Sea in the Permanent Court of Arbitration in The Hague in February 2013.

In July 2016, the tribunal ruled in favor of the Philippines, declaring China’s claim invalid under international law and pronouncing it in violation of the Philippines’ sovereign right to fish and explore resources in the West Philippine Sea, the waters within the country’s 370-kilometer exclusive economic zone in the South China Sea.

China, however, has ignored the ruling, and keeps insisting it owns almost all of the strategic waterway.

Last month’s sinking of the Gem-Ver 1 at Recto Bank reminded the Pangasinan fishermen of what happened to them in 2012.

“When we saw the news about the fishing boat Gem-Ver 1 getting rammed by a Chinese vessel, the memories of that day when we almost died flashed back,” Edemio Balmores, 47, captain of the Axl John, told the Inquirer.

Balmores’ cousin, Herman Balmores, 57, the boat’s cook, recalled that they were fishing around a “payao” (fish aggregating device) about 150 kilometers off Bolinao town in Pangasinan when they were caught in bad weather.

Herman said the crew anchored the boat near the payao after its 16-horsepower motors conked out. Then they waited for help.

They said a foreign vessel with Chinese markings came and rammed their boat, throwing them into the water. Then it sailed away.

After the incident, Edemio left fishing and ventured into raising pigs, using the P10,000 aid from the Department of Social Welfare and Development as capital.

But he ran out of funds to sustain his small pig farm. He  now works as a farmhand but  occasionally joins fishing trips.

“We hope that our national government will learn from our experience and look into the plight of small fishermen like us,” Edemio said.

Herman has also stopped joining fishing trips in the open sea after suffering paralysis two years ago. He now limits himself to fishing in municipal waters.