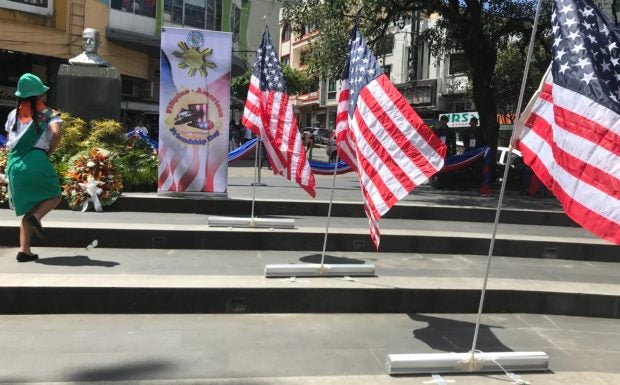 Baguio City, which was designed and built from the ground up by the American colonial government at the start of the 20th century, marked this year’s Filipino-American Friendship Day on Thursday (July 4) at the Malcolm Square. INQUIRER / Vincent Cabreza

BAGUIO CITY –– The “most American city” in the country commemorated Filipino-American Friendship on Thursday (July 4).

Baguio literally owes its existence to the United States, because the mountain city was designed, built and chartered as the summer capital by the American colonial government at the start of the 20th century, said Mayor Benjamin Magalong during a program at the Malcolm Square.

Magalong said the friendship with the US was most tested in World War II “when Filipino and American soldiers stood side by side as a band of brothers, who bravely and unselfishly gave up their lives [against the invading Imperial Japanese Army].”

“But this friendship runs even deeper in the city of Baguio,” which Magalong described as “the most Americanized of all Philippine cities … whose charter was written by an American [the late Supreme Court Justice George Malcolm, founder of the University of the Philippines College of Law].”

Magalong led the annual wreath-laying ceremonies held at the busts of Malcolm at the square, Kennon Road builder Lyman Kennon at the zigzag road, and famous Chicago architect Daniel Burnham at the famous park he designed when he drew up the plans for building Baguio.

He said many roads and places in the city were named after Baguio’s American founding fathers.

Camp John Hay, for example, is named after John Milton Hay, who was the American Secretary of State when Spain sold the country to the US, sparking the Philippine-American War.

In his speech, the mayor stressed that Burnham’s plan for the city was for a population of 25,000 residents.

It currently has about 350,000 dwellers, although the population grows to 725,366 people at day time, when students and employees living outside Baguio come to the city.

Magalong said he often prays that “this special friendship will continue to remain strong … through hell and high water by our shared love for freedom and democracy.”