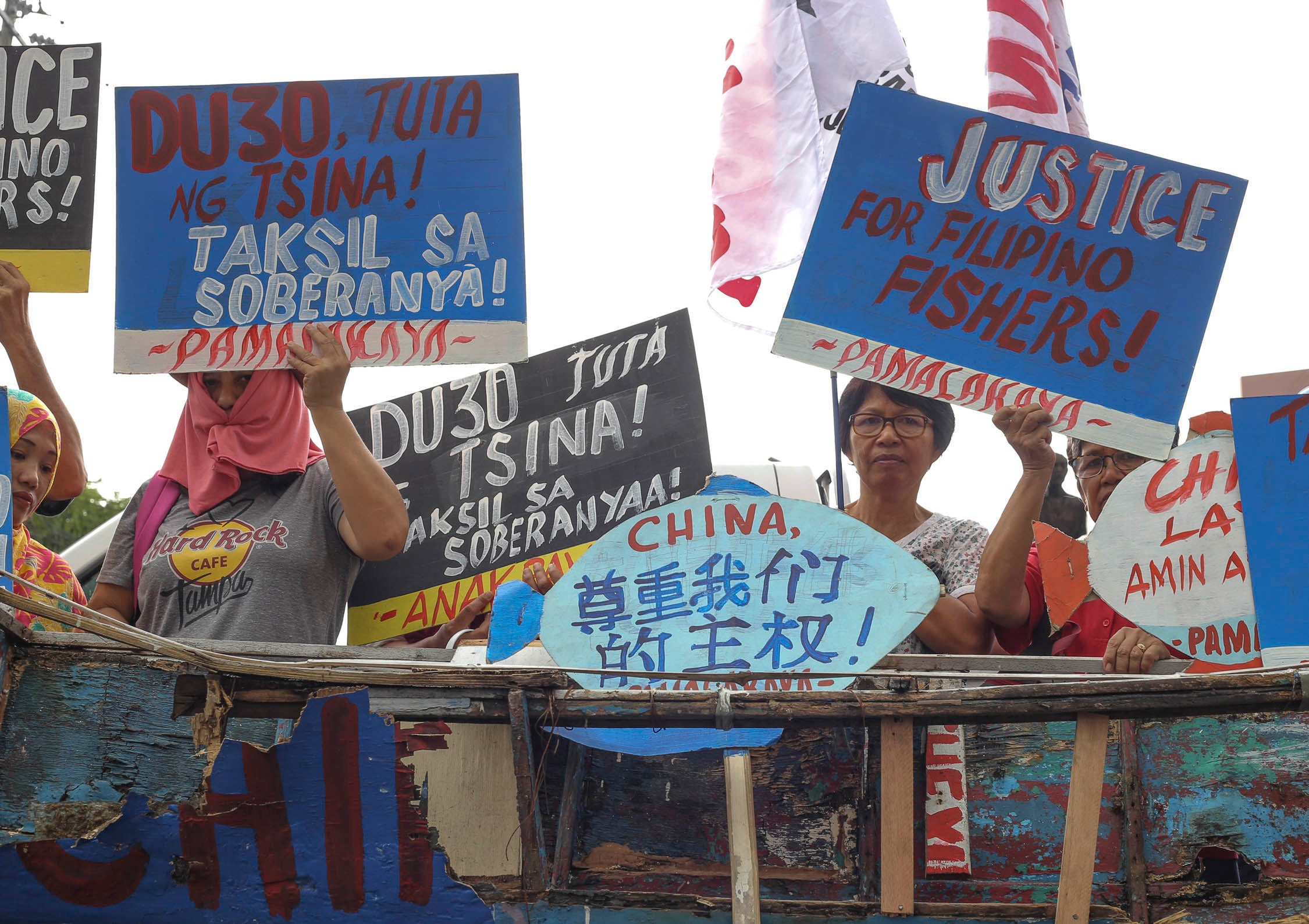 OUR SEA Members of the fishers’ group Pambansang Lakas ng Kilusang Mamamalakaya ng Pilipinas, who denounced President Duterte for saying the boat-ramming on June 9 near Recto Bank was just a small accident, will likely return to Mendiola, Manila, to rally against his policy of allowing the Chinese to fish in our country’s exclusive economic zone. —EARVIN PERIAS

Claiming he could not keep Chinese fishermen out of Philippine waters, President Duterte on Wednesday cited a deal he struck with Chinese President Xi Jinping in 2016, allowing the Chinese access to the Philippines’ exclusive economic zone (EEZ) in the South China Sea.

Malacañang said on Thursday that the agreement was aimed at avoiding armed confrontation over the territorial dispute with China in the South China Sea, but it was uncertain about the coverage and scope of the deal.

“They asked, ‘Will you allow the Chinese to fish?’ I said, ‘Of course.’ That was what we have been discussing before, that’s why we’re talking. And that’s why we’re allowed to fish again,” the President said in a speech in Malacañang.

“It was a mutual agreement. Let’s give way to each other. You fish there, I fish here,” he said.

Duterte also said enforcing a ban on Chinese fishing in Philippine waters would be problematic.

“If I prohibit it, how do I enforce? Even America is afraid, they don’t want to confront. Then they want me to do it? They really want me to get into trouble,” he said.

Duterte dared the United States, France and Britain to help the Philippines defend its interests in the heavily disputed South China Sea.

“This is my challenge to America, Britain, France. Let us assemble here in Palawan and let’s go straight to the Spratlys. Let’s wrest control of it from them if we can,” he said.

His remarks came following the eruption of a fresh controversy that he generated on Monday by saying China would not agree to having its fishermen banned from Philippine waters.

His spokesperson, Salvador Panelo, hardened the impact of that statement by referring to China’s claim of historic right over nearly the entire South China Sea.

Del Rosario, who led the Philippine legal team in challenging China’s sweeping claim in the UN-backed Permanent Court of Arbitration in The Hague, cited Article XII, Section 2 of the Constitution, which requires the state to protect the nation’s marine wealth and reserves for Filipinos the use of the country’s marine resources.

Vice President Leni Robredo cited the same provision in a television interview on Thursday, raising the complaint of Filipino fishermen about the aggressiveness of Chinese fishing vessels in poaching on Philippine waters.

“They can’t freely fish there. Even the constitutional provisions are very specific that that’s for our exclusive use and enjoyment,” Robredo said.

Also speaking in a television interview, Del Rosario raised the 2016 arbitral ruling that invalidated China’s sweeping claims in the South China Sea, and said “[t]he fact that we are giving away this [exclusive right] in some form or another, it diminishes the position that we have been given in terms of the arbitral tribunal outcome.”

“Since it is exclusive, you cannot allow other countries to fish in these areas which are covered by this economic zone without the consent of the people,” Morales said.

Gordon said he was disappointed with Duterte’s decision, adding that he disagreed with the idea of allowing foreign access to the Philippines’ exclusive economic zone.

While it was an act of sovereignty to allow another country access to Philippine waters, Gordon said, the President should include the legislature in making the decision.

“Like I said from the very beginning, our foreign policy and our defense and our national interest cannot rely on personal friendships,” Gordon said, referring to Duterte’s avowal  of friendship with China.

The controversy stemmed from Duterte’s playing down the sinking of a Philippine fishing boat at Recto Bank  after being hit by a Chinese trawler on the night of June 9 as just “a little maritime accident” even though the Chinese vessel abandoned the Filipino crew of the boat in the open sea.

He also said the incident was not about sovereignty because Recto Bank was not within the Philippines’ territorial waters 22 kilometers  from the coast.

Recto Bank, however, is within the Philippines’ 370-km EEZ in the South China Sea, which the Hague tribunal recognized in its 2016 ruling in favor of the Philippines.

On Thursday, Malacañang explained that the President would not ban the Chinese from fishing in Philippine waters because he made a deal with Xi to allow Chinese access to the country’s EEZ during his  first visit to Beijing in October 2016.

That deal, Panelo said at a news briefing, cleared the way for Filipino fishermen to fish anew at Panatag Shoal, which China seized in 2012, forcing the Philippine challenge in the Hague court.

“The entering of that agreement, more on, like I said, was to avoid armed conflicts, confrontation between the two sides,” Panelo said.

He, however, said he was uncertain about the coverage and scope of the deal, whether it  applied only to Panatag Shoal or the rest of the Philippine exclusive economic zone as well.

But contrary to Mr. Duterte’s statement on Wednesday night, Panelo stressed that the President never said that he was allowing the Chinese to fish in Philippine waters.

“No. The President was saying the question to him was, ‘Will we prevent China from fishing?’ His reply to that was, ‘I don’t think China would go fishing there.’ Because they had an agreement ever since. That was his explanation in his speech. The first time he went there, they had an agreement. Because they know that if there’s something there, there might be hostilities leading to armed confrontation,” Panelo said.

No need for ban

In a statement issued earlier Thursday, Panelo clarified that “what the President meant was China would not allow their nationals from fishing in our EEZ since they treat us as their friends, knowing that permitting their fishermen to fish in our EEZ would only result in an unwanted hostility leading to an armed confrontation.”

He also defended the President’s move to enter into a deal with Xi as constitutional.

“What the President did was more on avoiding dangerous situations that will affect the millions of Filipinos. He did nothing wrong there, it was even beneficial, because our fishermen are now able to fish in those areas, right?” Panelo said.

He added: “What would be unconstitutional in their agreement not to cause trouble in a particular place? Remember, this is a disputed territory. If not, then we wouldn’t have any problems.”

Panelo said there was no need for the Philippines to ban China from fishing in Philippine waters because it trusted that China would not do that.

“China won’t do something like enter there. So in other words, it is not necessary to prevent them from fishing because they will not do that. In other words, why would I prevent somebody to do something that he is not going to do?” he asked.

He defended the President’s remarks amid criticism that these may be grounds for impeachment.

Panelo dared Mr. Duterte’s detractors to file an impeachment complaint, maintaining that the President was only upholding his constitutional duty to protect and serve the Filipinos. —WITH REPORTS FROM DONA Z. PAZZIBUGAN, LEILA B. SALAVERRIA AND JHESSET O. ENANO