Duterte: Seeking US help in sea row to bring PH closer to war with China 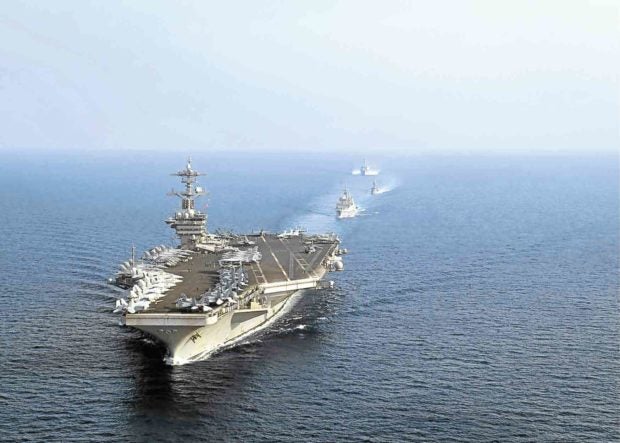 MARITIME SECURITY The aircraft carrier USS Theodore Roosevelt, seen in this photo leading a formation of US and Singapore Navy ships during an exercise in the South China Sea in April, was deployed to the US 7th Fleet for maritime and security operations in the region. US Assistant Secretary of Defense Randall Schriver on Thursday said Washington would be “a good ally” to Manila in its territorial conflicts in the South China Sea. —AFP

MANILA, Philippines—President Rodrigo Duterte on Thursday said dragging the United States (US) in the Philippines’ dispute with China over the West Philippine Sea will only bring the country closer to war.

Duterte issued the statement as Senator Panfilo Lacson insisted on invoking the Philippines’ Mutual Defense Treaty (MDT) with the US.

“I have to protect the interest of my country, the very life of the Filipino. One hundred ten million. America, bakit ka ba magsabi ng…bakit tawagin mo America? That will all the more bring us to the verge of war,” Duterte said in an interview in Malacañang.

Lacson, a former chief of police, called the MDT as the only weapon in our disposal in case the ramming and sinking of a Filipino fishing boat by a Chinese vessel in Recto Bank escalates into an armed confrontation.

The MDT dictated that both nations would support each other if either the Philippines or the United States were to be attacked by an external party.

READ: Treaty with US is only ‘weapon’ in PH arsenal, says Lacson

Duterte stressed that the US can only act in case of armed aggression against the Philippines.

In his speeches, the President had repeatedly claimed that the Philippines cannot take on the Asian powerhouse on an armed confrontation./ac