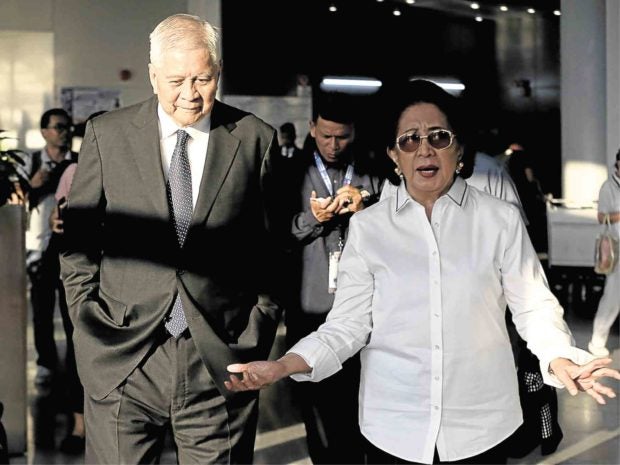 NOW THERE ARE TWO. Former Ombudsman Conchita Carpio Morales on Friday welcomes back to Manila former Foreign Secretary Albert del Rosario who, like her, was not allowed to enter Hong Kong. —RICHARD A. REYES

Another former high Philippine official who had filed a complaint against Chinese President Xi Jinping in the International Criminal Court (ICC) and a critic of Beijing’s aggressive actions in the South China Sea was denied entry to Hong Kong on Friday.

Former Foreign Secretary Albert del Rosario said he was held for six hours inside an immigration lounge at Hong Kong International Airport despite traveling on a diplomatic passport.

Del Rosario said the action taken by the Hong Kong immigration authorities was “harassment of the first order” for the case against Xi that he and former Ombudsman Conchita Carpio Morales had filed and for his strong stance against Chinese claims over nearly the entire South China Sea.

As foreign secretary, Del Rosario led the filing of an international arbitration case against China in January 2013 challenging the legal basis for Beijing’s expansive claims over the strategic waterway on historical grounds. The move was sparked by a standoff between Filipino and Chinese ships in 2012 in the disputed Panatag (Scarborough) Shoal, which Beijing later effectively seized.

“After holding me for six hours, they are now denying entry. That means that the diplomatic passport is not being honored and they refused to give the reason why,” Del Rosario told the Inquirer by phone as he was being escorted to a Cathay Pacific flight back to Manila shortly before 2 p.m. on Friday.

He said he would “look at options” as his lawyer, Anne Marie Corominas, told Hong Kong authorities that they violated his rights as a diplomatic passport holder under the Vienna Convention, the 1961 treaty which governs diplomatic relations among nations.

“I also received a suggestion from the DFA (Department of Foreign Affairs) on the possibility of protesting the failure of Hong Kong authorities to respect the diplomatic passport,” he told reporters upon his arrival at Ninoy Aquino International Airport (Naia).

In a reprise of what happened to Morales who was also barred entry to  Hong Kong on May 21 for being a “security threat,” Del Rosario was held by immigration officers shortly after he arrived at 7:40 a.m. on a Cathay Pacific flight from Manila.

He was supposed to attend board and shareholders meetings of the Hong Kong-based First Pacific Company. He was scheduled to return to Manila later in the evening.

Del Rosario, who was accompanied by officials from the Philippine consulate, sounded calm and composed as he updated the Inquirer on his condition.

“It is now four hours and still here. No explanation. Clearly looks like harassment of the first order,” Del Rosario said.

He said he had informed the DFA about his trip and the Philippine consulate relayed this to Hong Kong authorities.

During the entire time he was held, he wasn’t told the reason for his detention and denial of entry. 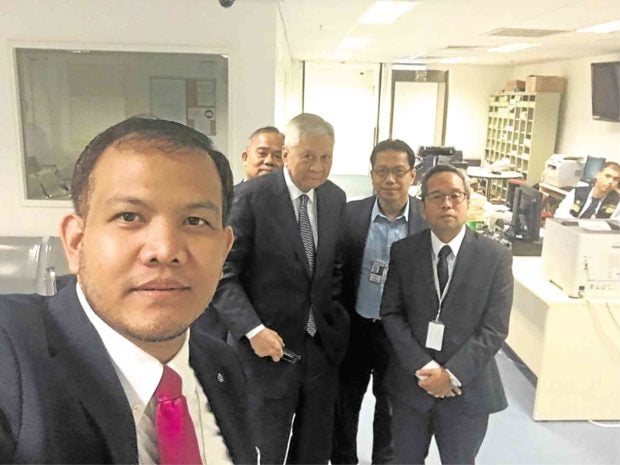 BARRED ENTRY. Former Foreign Secretary Albert del Rosario takes a respite from his six-hour detention at a Hong Kong immigration lounge for a selfie with officials from the Philippine consulate. No reason was given for why he was barred from entering China’s special administrative region but he believes it was in retaliation for his strong stance against China’s expansive claims over the South China Sea. —CONTRIBUTED PHOTO

He said he travels to Hong Kong about six times a year to attend business meetings and it was his first time to be refused entry.

Morales was traveling to Hong Kong with her family for a vacation on a nondiplomatic passport when she was stopped and detained by Hong Kong immigration officers for several hours. She was eventually allowed to enter but she decided to return to Manila.

Del Rosario said the move by the Hong Kong immigration authorities was clearly in retaliation for the communication which he and Morales filed in the ICC on March 15 to prosecute Xi and other top Chinese officials for crimes against humanity for their “atrocious actions” in the South China Sea.

They filed the complaint on behalf of more than 300,000 Filipino fishermen who were “persecuted and injured” by China’s aggressive island-building and -occupation in the West Philippine Sea, waters within the country’s 370-kilometer exclusive economic zone (EEZ) in the South China Sea. They also said China’s actions involved “massive, near permanent and devastating environmental damage across nations.”

In the international arbitration case, the tribunal ruled in July 2016 that there was no legal basis for China’s claim of historic rights over the waters and marine resources. It also said China violated Philippine sovereign rights by interfering in its fishing and petroleum exploration in its EEZ.

But President Duterte shelved the arbitral victory in favor of warmer ties with Beijing and Chinese aid and investments.

Presidential spokesperson Salvador Panelo said he could not understand why, after what happened to Morales, Del Rosario still made a trip to Hong Kong.

“Is it deliberate on his part, so that he will have the same situation where he can use it as a forum for his advocacy?” Panelo said in a television interview.

He said that if a country determined that someone was a security risk, a diplomatic passport would be worth “nothing.”

“We cannot question that,” Panelo said. “That’s absolute authority for a particular country to deny entry to their country.”

Speaking to reporters at Naia, Del Rosario said he “sort of expected” that he would also be denied entry like Morales.

“But I wasn’t sure and I wanted to test it, so we tested it, and this is the result. I think I was ready for something like this … because I have to pursue it since I have business in Hong Kong,” he explained.

Sen. Richard Gordon said the Hong Kong immigration authorities’ actions could be interpreted as “no less than intimidation if not outright harassment” of an internationally respected former diplomat.

“Hong Kong authorities acted with disrespect and exhibited lack of good judgment,” he said in a statement.

Hong Kong’s denial of entry to Del Rosario came two weeks after a Chinese fishing boat rammed a Filipino fishing vessel near the Recto Bank, leaving 22 fishermen in the water for hours before they were rescued by a Vietnamese fishing boat.

As he left for Hong Kong early on Friday morning, Del Rosario issued a statement calling China’s offer for a joint probe of the incident as an insult to the intelligence of Filipinos. —WITH REPORTS FROM JULIE M. AURELIO, DJ YAP, JOVIC YEE AND AP