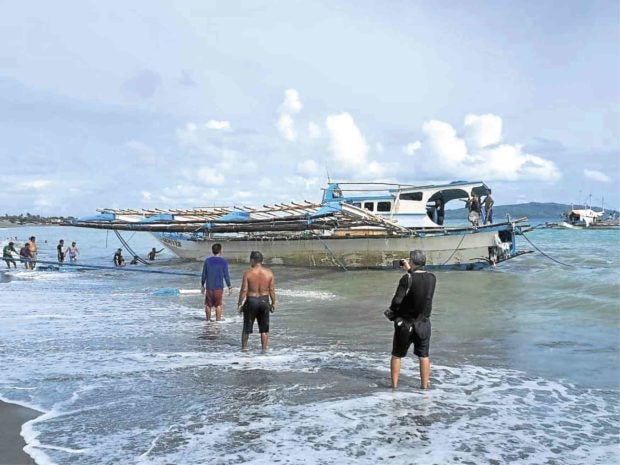 Fishermen inspect the damage to the FB Gem-Vir 1, which was salvaged by Philippine Navy divers after it sank on June 9 in the West Philippine Sea. (Photo from the Philippine Coast Guard)

This even after Presidential Spokesperson Salvador Panelo said President Rodrigo Duterte welcomes a joint probe on the incident.

“I’ve stated my view of this proposal; DFA (Department of Foreign Affairs) will act on MY VIEW & no one else’s. I talked to ES (Executive Secretary Salvador) Medialdea; Palace supports me. That’s that. Also I listen only to the DND (Department of National Defense) and NSA (National Security Agency),” Locsin wrote on Twitter.

READ: Locsin: There cannot be a joint probe on Recto Bank incident

I've stated my view of this proposal; DFA will act on MY VIEW & no one else's. I talked to ES Medialdea; Palace supports me. That's that. Also I listen only to the DND and NSA. This is a matter beyond civilian agencies' remit and falls well within the DFA's,DND's & NSA's. Period. https://t.co/SPBNC9AksA

Locsin’s statement comes in the wake of China’s suggestion for a joint probe on the incident that left 22 Filipino fishermen abandoned in open water for hours after a Chinese vessel reportedly rammed their fishing boat at Recto Bank in the West Philippine Sea.

“To find a proper solution, we suggest a joint investigation at an early date so the two sides can exchange respective initial findings and properly handle the matter through friendly consultations based on mutually-recognized investigation results,” Chinese Foreign Ministry Spokesperson Lu Kang said in a press conference in Beijing on Thursday.

However, the foreign affairs chief said whether or not a joint probe on the incident would be conducted is “a matter beyond civilian agencies’ remit and falls well within the DFA’s,DND’s & NSA’s. Period.”

Locsin earlier said that “there cannot be a joint investigation.”

“First principle of justice: no one can be judge of his own case,” he said over Twitter on Tuesday.

This after Presidential Spokesperson Salvador Panelo said a Philippine-China investigation on the incident is a possibility.

“A joint investigation trenches on each other’s sovereignty,” Locsin further said in another tweet suggesting that separate investigations should instead be conducted by the two countries.

“[D]ifferences discussed by the two sides. If both sides [are] satisfied, each side issues its conclusions hopefully the same. That fosters better bilateral relations,” he added.

On June 12, while the Philippines commemorated its Independence Day, Defense Secretary Delfin Lorenzana issued a statement which strongly condemned what he described was a “cowardly action” of the Chinese fishing vessel and its crew after they abandoned the Filipino fishermen after the reported June 9 ramming incident.

“Pagbangga sa amin binalikan kami at inilawan. Nung nakita kaming lubog na tinakbuhan po kami (After they hit us, they even went back to make sure that our boat was submerged before they left),” Junel Insigne, captain of F/B Gem-Vir 1, said on live television last week.

However, Insigne appeared to have changed his tune following a meeting with Agriculture Secretary Manny Piñol who went to Mindoro Occidental on Wednesday to talk to the fishermen.

The Chinese Embassy in Manila earlier denied that there had been an incident of a “hit-and-run.”

The Chinese Foreign Ministry has earlier called the reported ramming as an “ordinary maritime accident” while the President tagged it as a “little maritime accident.”  (Editor: Mike U. Frialde)