No intimidation in meeting with Recto Bank fishermen — Piñol 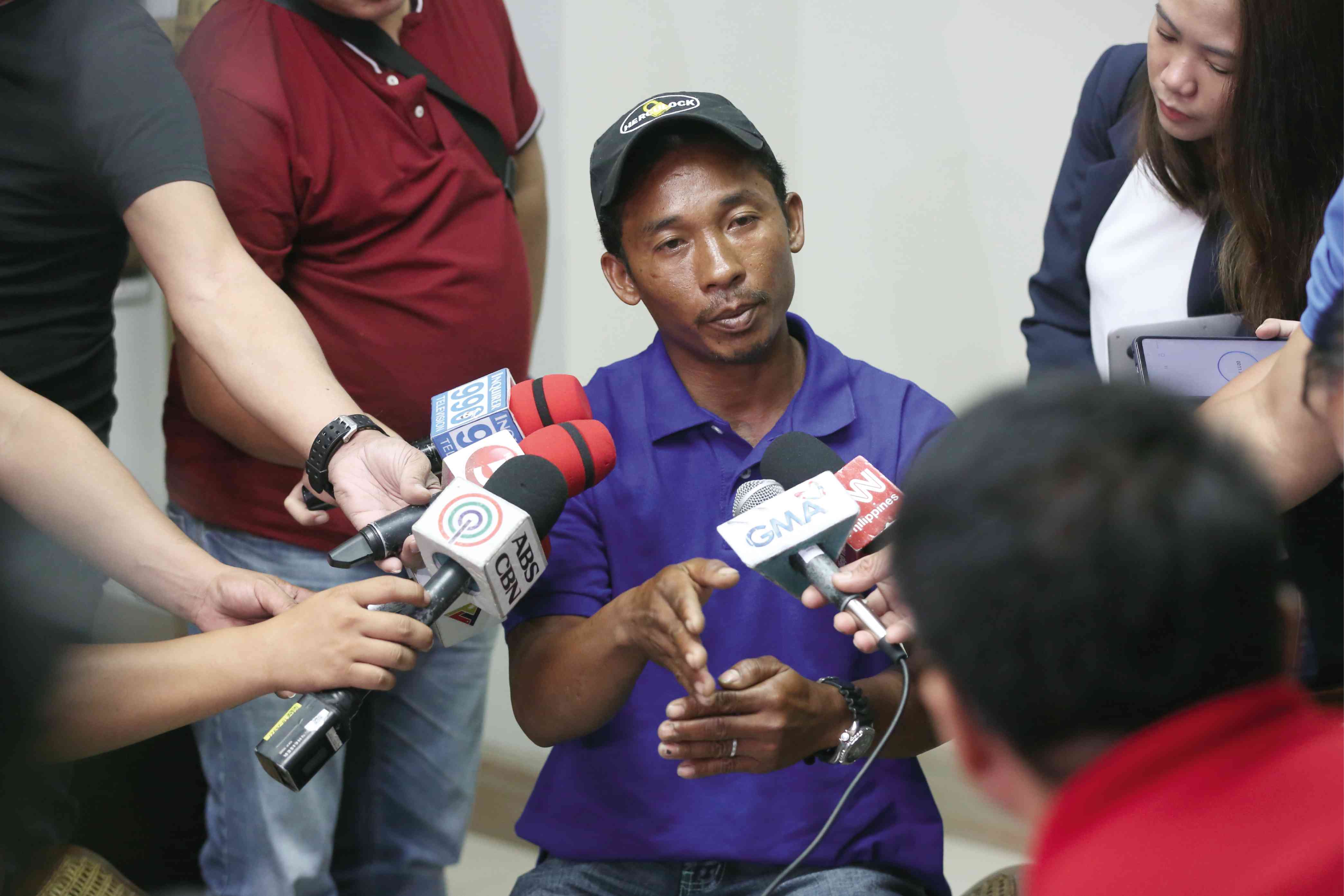 STORYTELLER Despite their nightmarish experience, cook Richard Blaza of the Gem-Vir 1 tells reporters how their fishing boat was hit by a Chinese vessel at Recto Bank (international name: Reed Bank). —NIÑO JESUS ORBETA

MANILA, Philippines – Agriculture Secretary Emmanuel Piñol on Thursday maintained that there was no intimidation during his meeting with Filipino fishermen whose boat was allegedly rammed by a Chinese vessel at the Recto Bank in the West Philippine Sea.

Piñol said it is unfair to hint that the fishermen were intimidated into changing their story about what had happened, into a version favorable to government.

“I don’t think there was any intimidation at all, if the interpretation of that scenario was that the fishermen were being intimidated, I think it’s wrong, and unfair sa akin ‘yan.  “Ako po’y pumunta dyan ng kusang loob, sa layunin kong tumulong,” he told DZMM in an interview.

“Let me just correct the impression that there was any attempt of this administration to intimidate the fishermen to change their story, or come up with a line that is favorable to government.  That is unfair to well-meaning people in government right now,” he added.

Critics have noted changes in the fishermen’s narration of their encounter with the Chinese vessel before and after meeting Piñol.

“The media should point out that Agriculture Secretary Pinol was sent not only to intimidate the fishermen into changing their narrative about the sinking of the F/B Gem-Vir fishing boat; he was also practically putting words into their mouths,”  veteran journalist and media critic Luis Teodoro said on Twitter.

Prior to the meeting, fishing boat captain Junel Insigne backed out of a supposed meeting with President Rodrigo Duterte, to clear his mind about the incident.  After talking with Piñol, he apologized for the miscommunication, saying that he did not really receive an invitation from the President.

READ: Fishing boat captain backs out of meeting with Duterte

Insigne and his crew are also now unsure whether the Chinese vessel really did intend to ram and sink their boat or if it was a just a simple maritime accident, as being claimed by China and Duterte.

As for the presence of police officers during Piñol’s meeting with the fishermen, Piñol said he was not aware of it. He added that he also did not ask for security escorts.

“Hindi ko po alam, I did not make any security arrangements.  I usually do not travel with a lot of security officers, in fact I only travel with two aides, isang retired policeman na bata ko no’ng ako pa ay gobernador, and isang staff na babae,” Piñol said.

On June 12, reports of a collision between a Chinese vessel and a Philippine fishing boat were released by Defense Secretary Delfin Lorenzana.  According to his accounts, the Chinese crew left the Filipino seafarers at sea, until they were rescued by Vietnamese fishermen near the area.

However, the Chinese Embassy in Manila previously said that the Recto Bank incident was not a hit-and-run.  Rather, seven to eight Filipino ships allegedly started to besiege the Chinese vessel, prompting it to hit one and sped away.  (Editor: Mike U. Frialde)

READ: China: No such thing as hit-and-run incident.  (https://globalnation.inquirer.net/176330/china-no-such-thing-as-hit-and-run-incident)