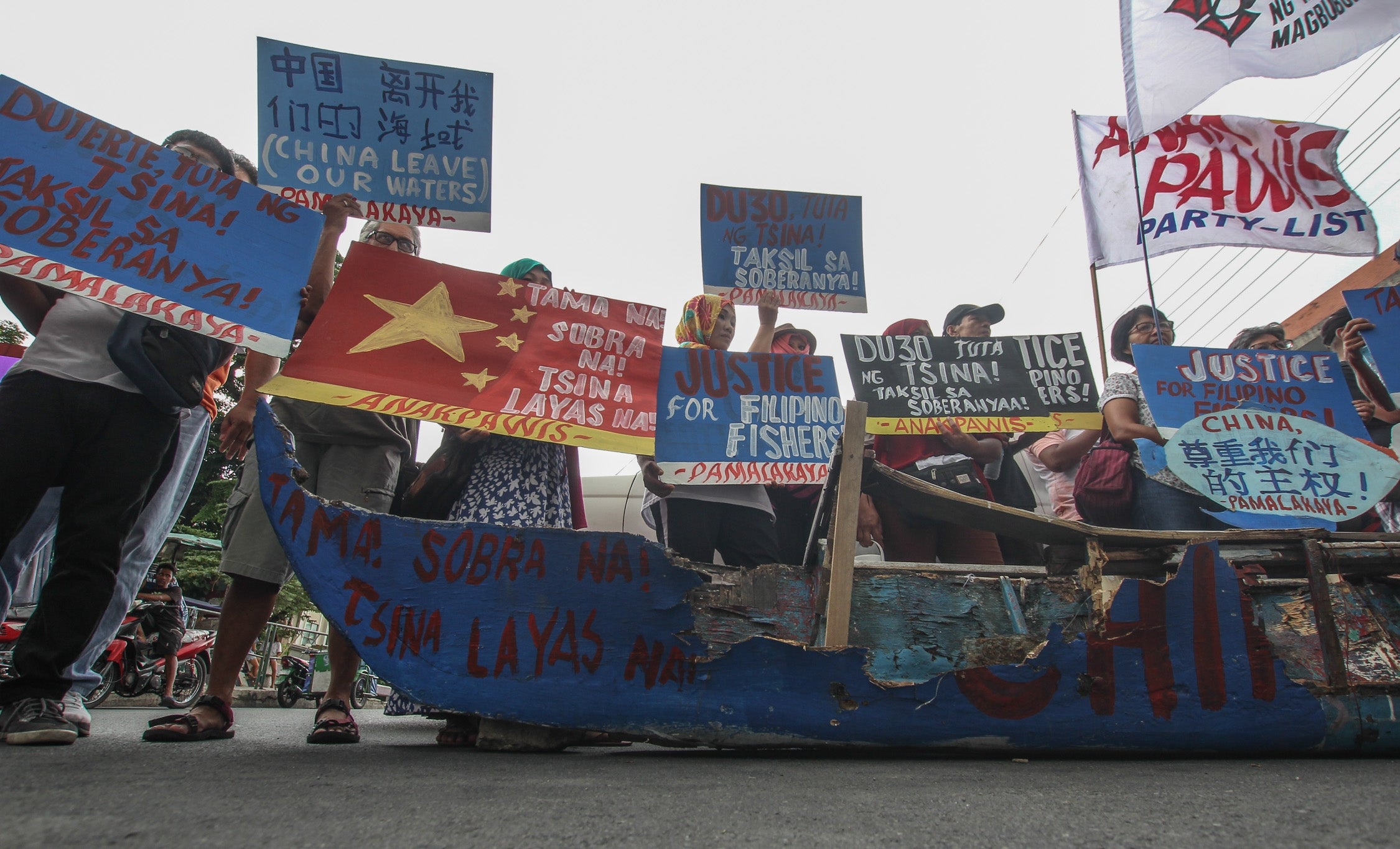 ROCKING THE BOAT Members of Pambansang Lakas ng Kilusang Mamamalakaya ng Pilipinas (Pamalakaya) hold a
protest rally on Mendiola, Manila, on Wednesday to denounce what they call President Duterte’s “insulting” remarks that the June 9 sinking of the Philippine fishing boat Gem-Vir 1 by a Chinese trawler at Recto Bank in the South China Sea was just a “little maritime incident.” —EARVIN PERIAS

MANILA, Philippines — The 22 fishermen who were abandoned by a Chinese trawler after hitting and sinking their boat in the South China Sea are asking President Rodrigo Duterte to hold the Chinese crew accountable.

They also want the President to declare the country’s exclusive economic zone in the South China Sea exclusive to Filipino fishermen.

Agriculture Secretary Emmanuel Piñol spoke about the fishermen’s requests during a news conference in San Jose, Occidental Mindoro, on Monday after a closed meeting with the crew of the Gem-Vir 1, which was anchored at Recto Bank in the South China Sea when it was hit by a Chinese trawler around midnight on June 9.

The Gem-Vir 1 sank but the Chinese vessel, instead of stopping to help the Filipino fishermen who had been thrown into the water, sailed away.

A Vietnamese boat that arrived in the area hours later rescued the Filipino fishermen.

Piñol, who said he was the “representative of the fishermen,” recounted the Gem-Vir 1’s crew’s account of the incident “as told by Richard Blaza,” the boat’s cook and the only one who was awake at the time of the incident.

Piñol and other agriculture officials visited the fishermen and gave them aid to tide them over after losing their boat.

The fishermen received rice, fiberglass fishing boats from the Bureau of Fisheries and Aquatic Resources, P25,000 in loans from the agriculture department, P10,000 in cash assistance from Energy Secretary Alfonso Cusi, packed food and P10,000 cash from the Department of Social Welfare and Development.

There was no word from Malacañang on Wednesday about the fishermen’s request.

In a speech on Monday, President Duterte dismissed the incident as just a “little maritime incident” and urged calm, as the Philippines was not ready to go to war against China.

His stand drew sharp criticism from both his allies and critics, including Sen. Panfilo Lacson, who said on Tuesday that the Philippines could invoke its mutual defense treaty with the United States to keep its waters in the South China Sea safe.

On Wednesday, presidential spokesperson Salvador Panelo shot down Lacson’s suggestion as “reckless and premature,” saying there was “no act of aggression” and that the government “don’t know what happened” at Recto Bank.

Lacson responded, saying Panelo was speaking like he was a defense lawyer for China.

“My first impression is that he’s acting like the defense counsel of China, or at least he’s lawyering for the Chinese crew, because he was looking for flaws [in the testimony] of the fishermen instead of holding his horses and [waiting] for the investigation to be completed,” Lacson told a news forum in the Senate.

“After he initially noticed a discrepancy, he was excited to point it out when it was [he] who said to wait for the investigation to be completed. What he is accusing the critics, he’s also doing,” Lacson said.

Defense Secretary Delfin Lorenzana, who last week condemned the “cowardly action” of the Chinese trawler, on Wednesday said the defense treaty could be triggered only by an armed attack.

Lorenzana, however, maintained his condemnation of the action of the Chinese vessel, even though he acknowledged that the hitting of the Gem-Vir 1 could have been an accident.

The defense chief said he had been talking to Piñol, who had been stressing Blaza’s statement that the Chinese vessel might not have seen the Gem-Vir 1 because there were only two lights on the fishing boat at the time.

As for China’s excuse for the abandonment of the Filipino fishermen, the captain of the Vietnamese boat gave a statement to the press in his country on Tuesday, corroborating the account of the Gem-Vir 1 crew that they struggled in the water for hours before they were rescued.

Nguyen Thanh Tam said his boat was anchored at the time and his attention was caught by two small boats carrying two men who were signaling to him and pointing to the direction of Recto Bank.

The two men were from the Gem-Vir 1 who had set out in emergency boats to look for help.

Tam said he understood that the men were asking for help and that there might have been an accident.

He said it took about an hour to get to Recto Bank because of poor visibility and when his boat got there he and his crew found 20 Filipino fishermen in the water.

The Philippine fishermen’s group Pamalayaka thanked Tam and his crew for rescuing the Gem-Vir 1 crew and condemned President Duterte’s playing down the incident.

The party list group Bayan Muna called on the President to chart a really independent foreign policy and abandon his “kneel or war” policy toward China. —With reports from Leila B. Salaverria, Marlon Ramos, Jeannette I. Andraded, Melvin Gascon and Frances Mangosing