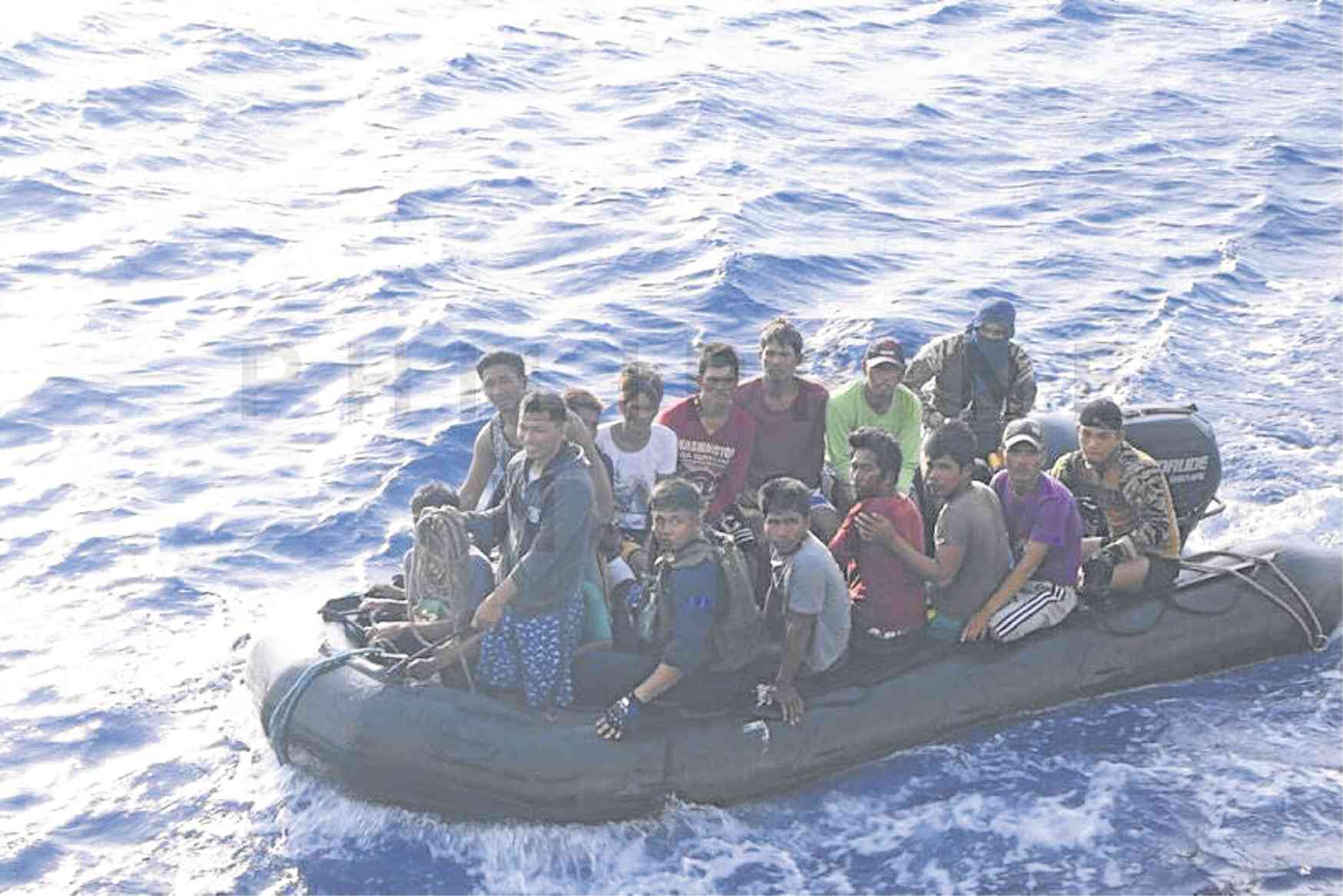 SAFE AND SOUND Twelve of the 22 rescued fishermen from the ill-fated FB Gim-Ver 1 are ferried to the Port of Caminawit in San Jose, Occidental Mindoro, aboard a Philippine Navy inflatable boat from the patrol vessel BRP Ramon Alcaraz, to be with their families. —PHILIPPINE NAVY PHOTO

MANILA, Philippines – Leaders of the group Bayan Muna have asked President Rodrigo Duterte how does he value the lives of Filipino fishermen after he called the latest incident that almost caused the lives of 22 fishermen in the West Philippine Sea a “little maritime accident.”

In a statement on Tuesday, Bayan Muna chair Neri Colmenares and Rep. Carlos Zarate questioned Duterte’s motives in allegedly downplaying the issue with the Chinese vessel’s alleged ramming of a local fishing boat in Recto Bank on June 9.

“Are the lives of our fishermen of so little importance to the President that he, along with his Cabinet, is now downplaying the issue that even if what happened was just an accident though all the witnesses and evidence tell otherwise the Chinese vessel should have helped the Filipino fisherfolk?” Colmenares said.

Zarate on the other hand accused Duterte of already surrendering the country to China with his recent statement.

He also accused the President of helping China whitewash the issue, instead of helping the 22 Filipino fishermen affected by the incident.

“President Duterte’s statement exonerating China for abandoning Filipino fishermen after the Chinese vessel hit the fishermen’s boat, a cop out and a sell out as it practically helps China whitewash the case,” the lawmaker claimed.

“The fact that the Chinese abandoned the fishermen despite their plea for help is not only a violation of international law but even of Philippine laws,” he added.

Duterte, in a speech in Cavite on Monday, dismissed the sinking of the fishing boat merely as a little maritime incident.

He also urged his critics to wait for results of the investigations before jumping to conclusions.

“What happened in the collision is a maritime incident. Do not believe the dumb politicians who want to send the Philippine Navy. You do not send gray ships there. That is only a collision of ships,” Duterte said.

“Maritime incident is a maritime incident. It is best investigated. And I do not now issue statement because there is no investigation and there is no result. Then the only thing we can do is wait and give the other party the right to be heard. That is important,” he added.

On June 12 — Independence Day — Defense Secretary Delfin Lorenzana confirmed that F/B Gim-Ver 1 was sunk after a “collision” with a Chinese vessel, near the disputed area in the West Philippine Sea.

After the incident, the Chinese ship abandoned the Filipino crew, who were eventually rescued by Vietnamese seafarers.

Lorenzana and other personalities such as Vice President Leni Robredo and other senators have condemned the Chinese crew’s actions.

Both Colmenares and Zarate urged Duterte to take a more aggressive stand against the Asian superpower, saying that possibilities of war are not realistic.

“His ‘kneel or war’ foreign policy that if we complain, China will invade is a ‘palusot’ because he knows that this has no factual basis.  Vietnam and Taiwan havae actively opposed China’s expansion but China cannot invade them for fear of antagonizing the international community […] ginagamit nya lang yan para i-justify ang kanyang pagpapakatuta sa Tsina”  Colmenares said.