Lorenzana: China envoy to be ‘invited’ over Recto Bank incident 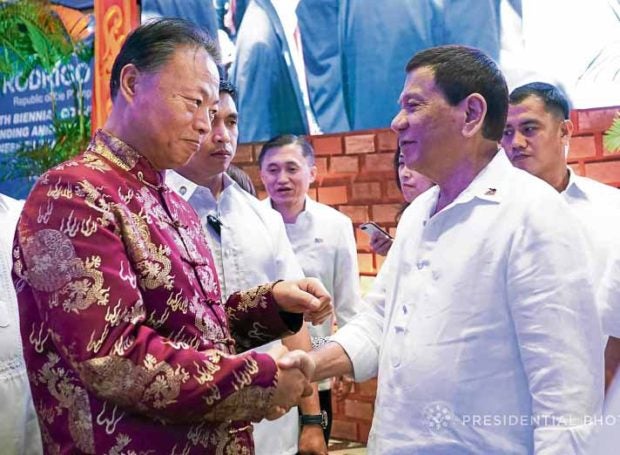 President Rodrigo Duterte greets Chinese Ambassador to the Philippines Zhao Jianhua (left) during a Chinese-Filipino business convention at the Manila Hotel on Feb. 19, 2018. (Photo from Malacañang)

He said this was discussed during the Cabinet cluster meeting earlier in the day.

[That’s the result of the meeting today. We are inviting him to talk about their version of their incident. Because right now what we’re getting is unofficial. There will be an official investigation.]

Cabinet Secretary Karlo Nograles earlier denied an Inquirer report that the Chinese ambassador would be summoned by the Palace.

Last week, a Chinese vessel rammed and sunk an anchored Filipino fishing boat near Recto Bank in the West Philippine Sea. The 22 Filipino fishermen were later picked up by a Vietnamese fishing vessel.

Lorenzana had earlier condemned this incident and called for diplomatic action.

But a few days after his statement, there now appears to some doubt from the government on whether the ramming was intentional or not.

He also said the ramming might not be state-sponsored amid speculations that the vessel could be part of the Chinese maritime militia.

[Let us put the incident into its proper perspective. This is not sponsored by the state. They won’t do that. Their initially claim was that it was an accident.]

While a formal investigation is underway, Lorenzana said the livelihood of the fishermen would be addressed by government agencies.

[What we’ll do now is take care of the fishermen because they can’t go back fishing yet. Their boat is damaged and they have families. So other agencies of the government will go there and provide assistance.]