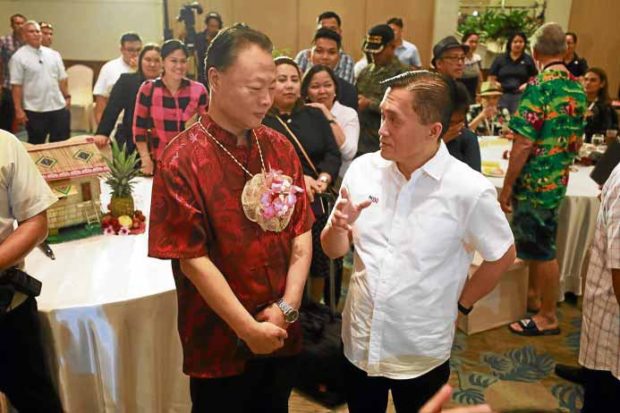 Chinese Ambassador Zhao Jianhua chats with Christopher “Bong” Go, then special assistant to the President, on the sidelines of an Asia-Pacific health conference in Davao City on Wednesday, July 25, 2018. (Photo from Malacañang)

MANILA, Philippines — Even President Rodrigo Duterte’s closest aide, incoming Sen. Christopher Lawrence “Bong” Go, apparently remains unconvinced by the testimony of 22 Filipino fishermen that their fishing boat was rammed and destroyed by a Chinese trawler at Recto in the West Philippine Sea.

“We are currently waiting for the result of the ongoing investigation of both the Chinese government and our government to determine exactly whether the collision was a maritime accident or an intentional act on the part of the Chinese vessel,” Go said in a statement issued on Monday.

“This matter should be discussed by the two countries in a diplomatic manner. Should there be findings that there was a deliberate act to harm the Filipino fishing boat, the perpetrators should be made to answer,” he said.

He said it should also be determined if the decision of the Chinese crew to abandon the Filipinos in the high seas was “justified.”