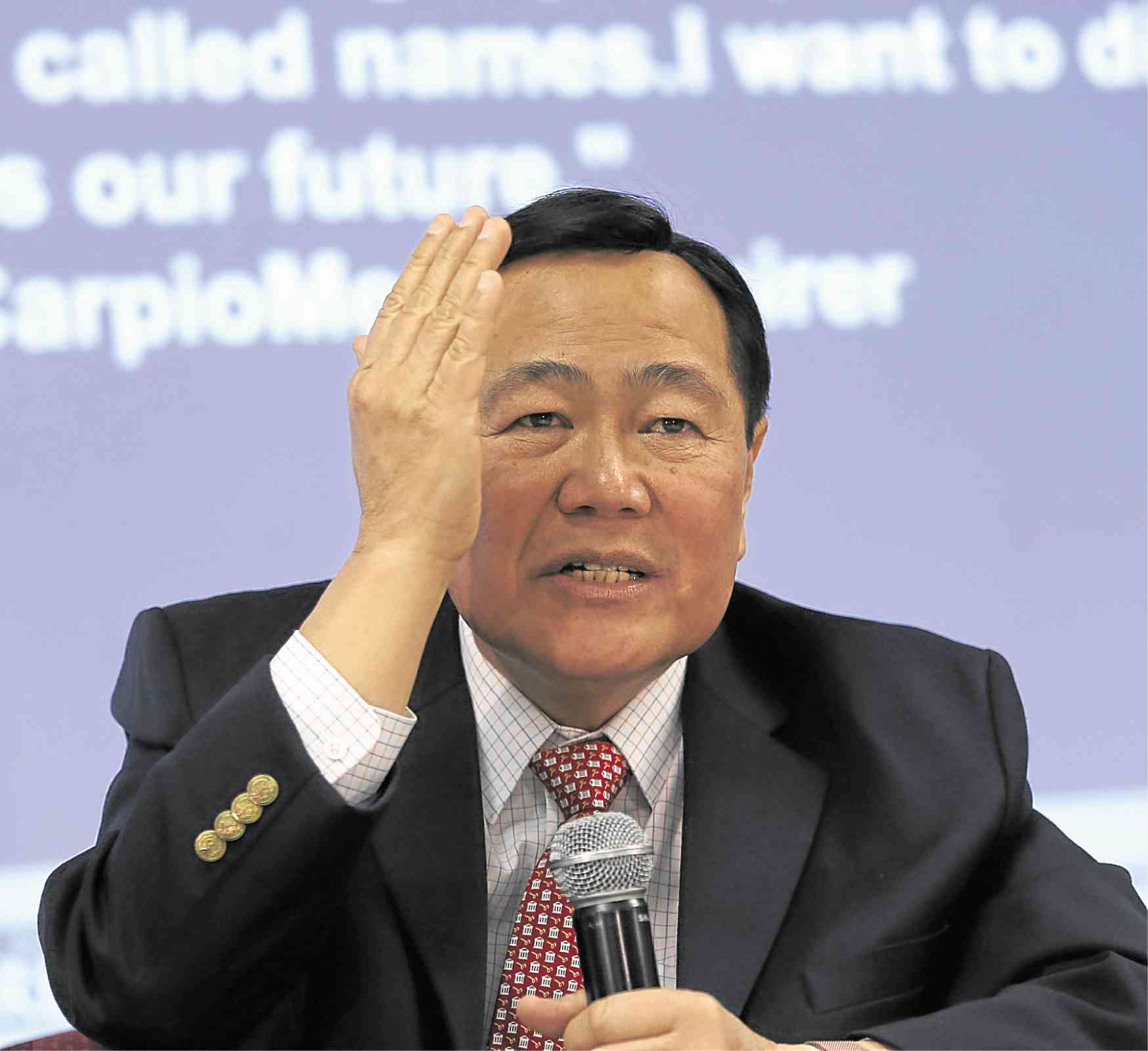 MANILA, Philippines — The Philippines should send a strong signal to China that a repeat of the ramming of a Filipino fishing boat by a Chinese vessel in the South China Sea could lead to a break of diplomatic ties, Supreme Court Senior Associate Justice Antonio Carpio said on Saturday.

A staunch critic of China’s maritime claims and conduct in the disputed waterway, Carpio said the Duterte administration must stand up to Beijing to assert the country’s sovereignty.

“The Filipino people must send a strong signal to China that any new ‘gray zone’ offensive of ramming Filipino fishing vessels in the West Philippine Sea will mean a break of diplomatic ties with China,” he said in a statement.

Carpio said the Chinese trawler that hit the Philippine fishing boat Gem-Vir 1 and sank it at Recto Bank on the night of June 9 was “highly likely” part of China’s so-called maritime militia that has also attacked Vietnamese fishing boats in other areas of the South China Sea.

The incident, he warned, could be the start of a more aggressive campaign by Beijing to discourage the presence of Philippine fishing boats in the West Philippine Sea, waters within the country’s 370-kilometer exclusive economic zone (EEZ).

The magistrate said the owner of the Gem-Vir 1, its captain and crew deserved compensation and justice.

“The Filipino people must demand from China compensation for the owner of Gem-Vir, and punishment for the captain and crew of the Chinese vessel that rammed [the Gem-Vir 1] in hit-and-run fashion,” he said.

The Chinese Embassy in Manila admitted on Friday that a Chinese fishing boat indeed “bumped” into the Gem-Vir 1 but denied that the collision was intentional.

In a statement, the embassy said that the Chinese fishing boat Yuemaobinyu 42212 from Guangdong province had sought to rescue the Filipino fishermen but fled after it was “besieged by seven or eight Filipino fishing boats.”

But Carpio dismissed the Chinese Embassy’s claim and said China’s maritime militia vessels were notorious for ramming fishing boats from other claimant countries in the South China Sea.

“Previously, Chinese maritime militia vessels just loitered in the territorial sea of Pag-asa [Thitu] Island and other Philippine-occupied geologic features in the Spratlys, intimidating the Filipino occupants of these features,” he added.

According to Carpio, the Chinese militia vessels have “reinforced steel hulls purposely for ramming fishing vessels of other coastal states.”

“No other coastal state has fishing vessels purposely designed for ramming other fishing vessels. Captains of ordinary Chinese fishing vessels do not engage in ramming for fear of inflicting damage to their own vessels. It is thus highly likely that a Chinese maritime militia vessel rammed the Gem-Vir,” he said.

The Chinese maritime militia is trained, equipped and organized by the People’s Liberation Army Navy (PLAN), said Carpio, who has done extensive studies on the South China Sea conflicts.

While at sea, the Chinese vessels serve under the PLAN, he said.

Carpio noted that the Gem-Vir 1 was hit while anchored at Recto Bank and its crew was asleep. He said the incident was “a clear violation” of the United Nations Convention on the Law of the Sea (Unclos).

In a ruling invalidating China’s sweeping claims in the South China Sea in 2016, the Permanent Court of Arbitration in The Hague, Netherlands, said that the failure of China to prevent its fishing vessels from fishing within the Philippines’ EEZ was a violation of Unclos, he said.

Foreign Secretary Teodoro Locsin Jr. on Saturday tweeted that the Chinese version of the incident should just be “Noted” or “Noted. Next.”

“[The] proper official response to [the] Chinese version—whether it changes or changes back or whatever—is simply: ‘Noted.’ Chinese is free to do the same. We press on with our version. I authorized London PE (Philippine Embassy) to appeal to the [International Maritime Organization (IMO)],” he said.

“We press on with our military’s version. I don’t trust civilians on security issues; our military can never be our enemy; civilians on the other hand, well … A soldier is a civilian with a steel backbone. A civilian is just like that—a civilian,” he said.

The Department of Foreign Affairs (DFA) on Saturday said the sinking of the Gem-Vir 1 had been referred to the Maritime Safety Committee of the London-based IMO.

In a statement to the committee, Philippine Deputy Permanent Representative Senen Mangalile said the Filipino crew of Gem-Vir 1 was “callously abandoned to the elements on the rough seas and would have perished” were it not for the assistance of a Vietnamese vessel.

“It is the obligation of every responsible member state of the United Nations and the IMO to implement these conventions and related codes concerning maritime safety and security, rather than just paying lip service to them. It is also our moral obligation to save a human life whenever and wherever we can do so,” the DFA quoted Mangalile as saying.