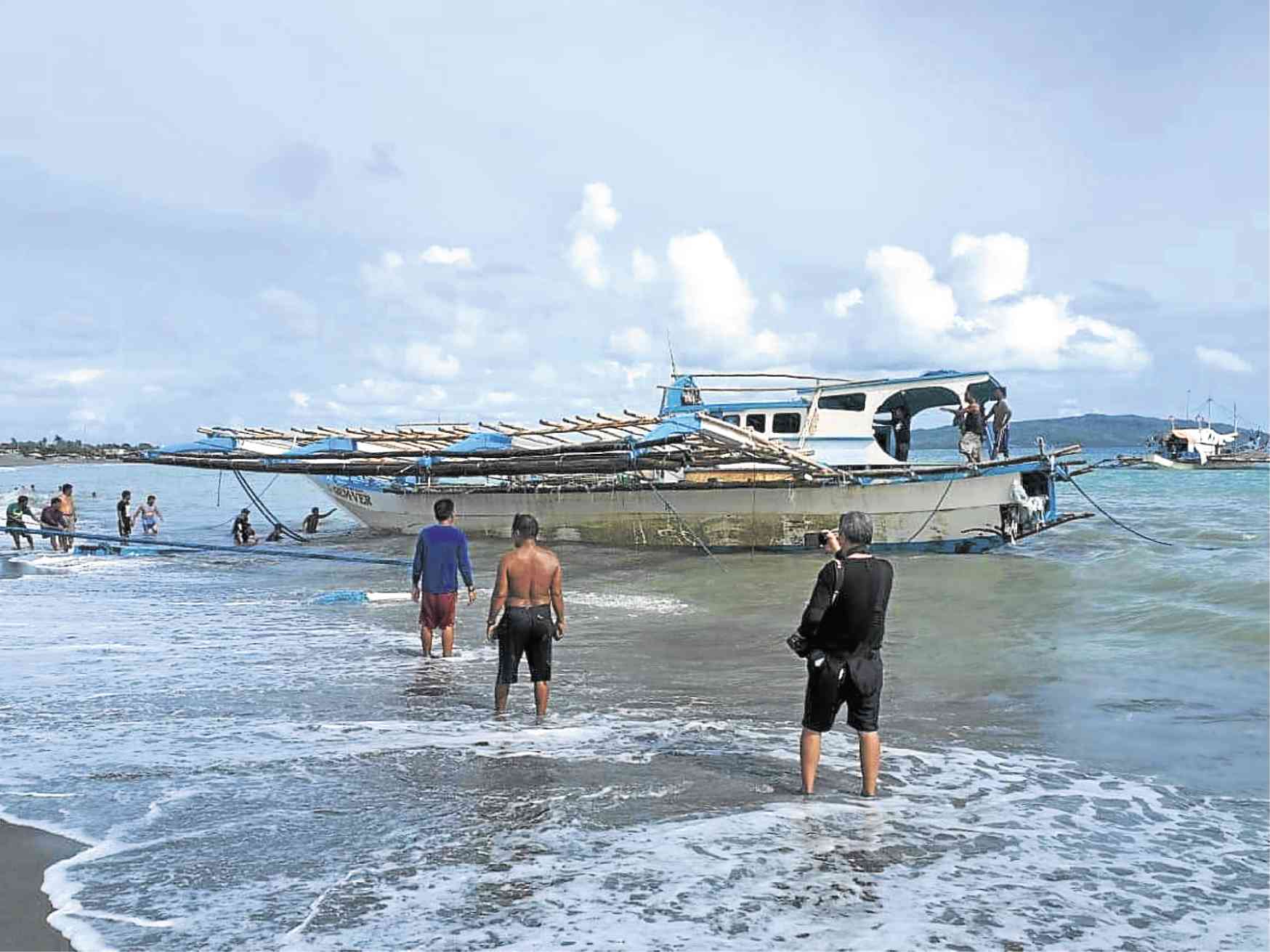 AFLOAT AGAIN Fishermen inspect the damage to the FB Gem-Vir 1, which was salvaged by Philippine Navy divers after it sank on June 9 in the South China Sea. —PHILIPPINE COAST GUARD PHOTO

SAN JOSE, Occidental Mindoro, Philippines — The captain of the Philippine fishing boat that sank after it was hit on June 9 by a Chinese trawler at Recto Bank in the South China Sea has disputed a statement by the Chinese Embassy in Manila that the collision was not intentional.

The skipper of the FB Gem-Vir 1 insisted on Saturday that the midnight collision was a hit-and-run, contrary to the embassy’s claim that the Chinese trawler fled the scene after it was “besieged” by several Philippine fishing boats.

“I got angry because [the Chinese Embassy] had a contradictory story. Their story is false. If they were hoping to rescue us, then why did they leave us,” Junel Insigne, 43, said in an interview with the Inquirer on Saturday.

The Chinese Embassy said the crew of the Chinese trawler Yuemaobinyu 42212 accidentally “bumped” into the Gem-Vir 1 as it tried to maneuver and then left the scene due to safety fears.

“The Chinese captain tried to rescue the Filipino fishermen, but was afraid of being besieged by seven or eight Filipino fishing boats,” the statement said.

It said the incident was not a hit-and-run, as Foreign Secretary Teodoro Locsin Jr., Defense Secretary Delfin Lorenzana and the rescued fishermen themselves had claimed.

“There was no such thing as  ‘hit-and-run,”’ the Chinese Embassy said.

No other vessels nearby

But the Filipino fishermen, who all but one came from San Jose town, told a different story, saying they had spent hours in the water awaiting help.

They were eventually picked up by a Vietnamese fishing boat and brought home on Friday aboard the Philippine Navy patrol vessel BRP Ramon Alcaraz.

Elizer Salilig, regional director of the Bureau of Fisheries and Aquatic Resources, quoted the fishermen as saying there was no other fishing vessel in the area, apart from the Gem-Vir 1 and the Chinese trawler, when the collision happened.

The Vietnamese boat, the closest to the scene, was about “10 kilometers” away, said Salilig, whose agency, along with the Philippine Coast Guard station in Occidental Mindoro, has been tasked by Malacañang to submit a report on the incident.

Quoting the fishermen, Salilig said it took the Vietnamese vessel an hour to reach the sunken Gem-Vir 1 and pull the fishermen out of the water.

Senators Panfilo Lacson, Risa Hontiveros, Richard Gordon, and Francis Pangilinan denounced what they said were the “insults” and “lies” offered by the Chinese government to avoid condemnation over the incident.

“[China’s] story doesn’t make sense; it is an insult to the intelligence of Filipinos. If they have plans of not revealing the whole truth on the matter, they should at least make sure they craft a well-written script,” Lacson said.

“They insult us like they’re telling us that we are stupid people,” he added.

According to Lacson, China’s actions put to the test its friendship with the Philippines.

As fake as China claims

Hontiveros said the Chinese government’s explanation was “a flimsy attempt at a cover-up to shield the Chinese crew from any accountability and shift the blame and responsibility to our distressed fisherfolk.”

If there were indeed seven to eight Filipino fishing boats besieging the Chinese fishing vessel, Hontiveros asked why it was a Vietnamese fishing boat that rescued all the 22 Filipinos.

She renewed her call for President Rodrigo Duterte to downgrade diplomatic relations with China by recalling the Philippine ambassador in Beijing.

Pangilinan branded China’s version of events “as fake as its territorial claims,” and called on the President and his administration to stand up to Beijing.

“Now is the time to show real grit and toughness,” Pangilinan said.

Gordon said the Philippines should invoke its extradition treaty with China to hold the people responsible for the incident liable under international law.

“[China’s statement] was baloney. This is not the first time that the Chinese did this and they always think they can get away with it,” Gordon said.

The President has come under criticism for his silence on the incident although his spokesperson, Salvador Panelo, described the abandonment of the Filipino fishermen after their boat sank as “uncivilized as it is outrageous.”

The incident, which happened while the Gem-Vir 1 was anchored at Recto Bank in the West Philippine Sea, waters within the country’s 370-kilometer exclusive economic zone in the South China Sea, sparked outrage and cries of condemnation against China.

Locsin on Thursday said he had “fired off” a diplomatic protest against China and strongly condemned the action of the Chinese vessel in abandoning the Filipino fishermen.

Salilig said the fishermen were all asleep, except for crew member Richard Baza, who was preparing to cook rice when the Chinese vessel suddenly approached.

“Then [Baza] saw this boat with its big, bright lights approaching the Gem-Vir 1. He woke up Insigne and started to lift the boat’s anchor,” Salilig said.

The Filipinos managed to lift anchor by about 2 meters before the Gem-Vir 1 was hit at the stern, he added. —WITH REPORTS FROM AFP AND AP