BRUSSELS—Divisions among European Union nations on how to deal with illegal immigrants and crime deepened Thursday, with some members deriding plans by others to reinstate internal border controls. 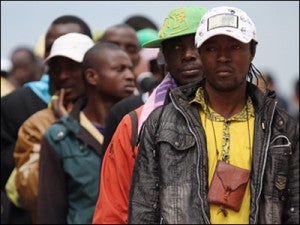 At a special meeting of EU interior ministers, Denmark was singled out for criticism for saying it would install permanent stations along its frontiers to curb crime and illegal immigration.

France and Italy raised the possibility of reintroducing border controls to stem the flow of illegal immigrants from northern Africa, to the anger of many in Europe.

Germany led demands that it should not be made easier for member states to turn their back on the Schengen Agreement, which allows unfettered travel across national borders—a cornerstone of EU policy.

“Currently, the majority view is that one country should not be in a position to make a decision like that” and easily reintroduce border checks, said Hungarian Minister Sandor Pinter, who presided the meeting. “That might trigger a chain reaction that might shatter confidence in other countries. So we do not want to let it happen.”

Others countries, however, claim unrestricted travel has led to an increase in illegal immigration and crime, since migrants and criminals can move freely, without visas or border checks, through all 25 nations of the Schengen zone.

“What is the answer in bringing back borders? What will it produce? Nothing,” said Belgian Migration Minister Melchior Wathelet. “Too bad it is being brought forward by several nations.”

The interior ministers are aiming to set up proposals for a June 24 EU summit of government leaders.

Denmark’s Immigration Minister Soeren Pind said the officials wanted to check with scanners “whether there are a strange amount of people aboard strange-looking vehicles” to make sure there is no human trafficking.

German Foreign Minister Guido Westerwelle even took it up with his counterpart from neighboring Denmark, Lene Espersen.

“This is far more than a German-Danish question, it is a question of the right to freedom of the citizens of Europe. I will do everything in my power … to ensure there are no steps backward.”

“Freedom to travel is a higher good that we cannot sacrifice for internal political reasons,” he said.

The increase in illegal immigration into Italy and beyond, largely from north Africa, has been seized upon by many right-wing movements to push for national border checks. French President Nicolas Sarkozy is facing a right-wing challenge from the Front National as elections loom next year. Right wing parties in other EU nations have also seized on the new wave of migrants to push their point.

“I am worried that if individual nations reintroduce checks for national political reasons, others will be pressured to do likewise. It may help in an election campaign but the spiral must be stopped from the start,” said German Interior Minister Hans-Peter Friedrich.

The leader of the Socialists at the European parliament, Martin Schulz, accused Denmark’s government of “pure populism,” telling the German daily Tagesspiegel that “a possible refugee problem in North Africa certainly won’t be resolved at German-Danish border.”

“It cannot be that any government may just decide to quickly suspend the European citizen’s basic freedoms,” he said.