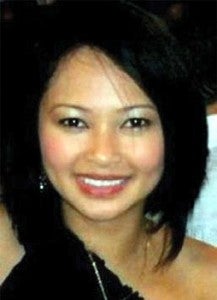 SAN JOSE, California—The husband of a Filipino-American graduating business student at San Jose State University shot and killed her and a male classmate in a car in a campus parking garage then turned the gun on himself, authorities said Thursday.

Police said they were sitting inside a black Mercedes Benz Tuesday night when Napoleon Lavarias Caliguiran, 54, fired multiple shots from outside the vehicle owned by the married couple.

The gunman then turned the gun on himself.

Police said the victims died on the spot, while the gunman died later at Valley Medical Center.

Campus police Peter Decena said they have yet to determine a motive for the attack, and said it was being investigated as a domestic violence incident.

University Professor Howard Turetsky told the San Jose Mercury News that both victims were honor students who were members of Beta Alpha Psi, an honors organization for accounting and finance students.

Both students were expected to graduate this month. Williams had already been hired by PricewaterhouseCoopers.

Not much was known about Cindy’s relationship with her husband, other than she was married and they lived at the Elan apartments in North San Jose.

Cyndy Caliguiran’s parents live in the Philippines and could not be reached for immediate comment.

Newark resident Mike Supnet, Napoleon’s brother-in-law by his first marriage, said Caliguiran was a nice guy who had married Cyndy about three years ago after a 25-year first marriage.

“I have nothing to say bad about the guy,” said Supnet. “Something snaps, something happens, we don’t know. Sometimes the water fills the glass and spills over the glass and that’s what happened.”

Supnet said he has no idea how the couple met, but said Napoleon’s children, both professionals, accepted Cyndy and treated her well. He did not know much about Cyndy either.

When San Jose State University police arrived at the parking garage Tuesday night, they found the two students fatally shot inside the car, as well as Napoleon and a gun nearby. He died later at Valley Medical Center. Authorities have not disclosed a possible motive for the shooting.

The Caliguirans lived at the Elan apartments in North San Jose, a very high-density development where two-bedroom, two-bathroom units rent for $2,000 a month. Two weeks ago, there was so much stomping from the Caliguirans’ upstairs apartment that the downstairs neighbor called security.

Still, any type of violence erupting from Napoleon surprised his former brother-in-law.

“I dropped my jaw and felt sick to my stomach,” Supnet said. “I cannot even believe he could pick up a gun and shoot somebody. This guy is not a monster. He’s a nice guy.”

Williams was recently recognized during a campus ceremony for making the President’s List with a 4.0 average, said his father, Thomas Anthony Williams.

The elder Williams said his son had been happily married for three years and was scheduled to start a job with PricewaterhouseCoopers in San Jose in the fall.

“He was our only son, we were so proud of him, for what he did and for the future he had created for himself. The whole family is just devastated,” the elder Williams said. FilAm Star Staff