Perpetrators of ‘collision’ in WPS should be ‘condemned’ — China spox 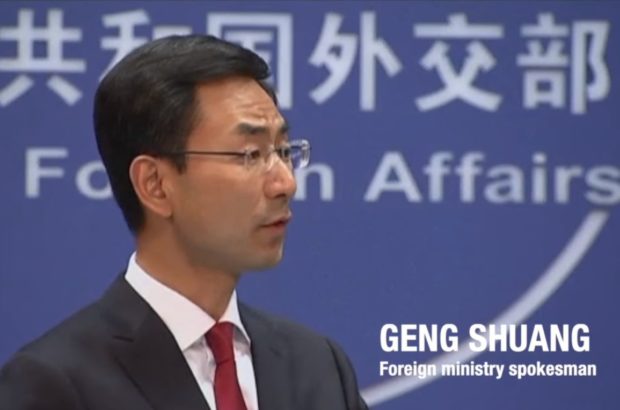 MANILA, Philippines — “The perpetrators who escaped from the scene, no matter which country they came from, should be condemned.”

Chinese foreign ministry spokesperson Geng Shuang said this after a crew of a Chinese vessel reportedly left 22 Filipino fishermen aboard a sinking Filipino vessel in the Recto Bank in the West Philippine Sea last June 9.

For China’s part, Geng said the government is investigating the incident, adding that the issue can be handled “through regular channels.”

“Such incidents can be properly handled through regular channels. It is irresponsible to resort to the media to hype and politicize the incident without verification,” Geng said.

“China will continue the investigation into the matter of the lives and property of the two peoples and coordinate with the Philippine side to properly handle it,” the spokesperson added.

Defense Secretary Delfin Lorenzana has called for the investigation of the incident and asked for diplomatic steps to be taken.

“We condemn in the strongest terms the cowardly action of the Chinese fishing vessel and its crew for abandoning the Filipino crew. This is not the expected action from a responsible and friendly people,” Lorenzana said.

Lorenzana, however, clarified on Thursday that they are still checking if the boat that hit the Filipino vessel was indeed from China.

“We are only basing our report to the media on the statement of the fishermen kasi hating gabi nangyari eh, madilim. Although sila may ilaw, ‘di naman pwedeng mawalan sila ng ilaw,” Lorenzana said.