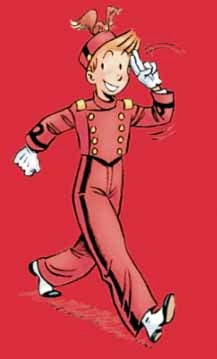 MANILA, Philippines — Spirou, a Belgian bellhop/reporter, has landed in the Philippines to help open doors in raising awareness of human rights in a more friendly, less gloomy way.

The iconic cartoon hero has chosen the halls of the Commission on Human Rights (CHR) central office in Quezon City for a new home, after the Belgian Embassy gifted the commission the permanent exhibit on Monday.

The colorful exhibit features the titular character Spirou and other characters in comic strips that feature the 30 articles of the UN Universal Declaration of Human Rights, which was adopted over 70 years ago in December 1948.

Joining the anniversary campaign last year, the special comic strips were created by several authors to illustrate each of the 30 articles of the Universal Declaration, such as the right to life, freedom from discrimination and access to justice.

“It provides a new way for us to create a better understanding of human rights… Using this medium of comics, with Spirou and the other characters, will help us reach the younger generation who will hopefully appreciate [their] rights and stand up for them,” Gascon said during the official handover ceremony.

Spirou, along with other characters like Marsupilami, Lucky Luke and the Chat, was created in 1938 by Spirou Magazine, 10 years before the UN Declaration was adopted. The magazine is published by Editions Dupuis, a leading European comic publisher, whose catalog includes other iconic characters such as The Smurfs.

Since his creation, Spirou has conveyed human values in stories and comics that were read by generations of children, Belgian Ambassador Michel Goffin said.

“He would often denounce, defend or question controversial topics, such as inequality and protection of the vulnerable,” he said.

Human rights are often discussed or pictured in a “gloomy” atmosphere, Goffin said. He expressed hope that through the exhibition, these will also be discussed in a lighter way that can reach more audiences.

With his long-standing commitment to stand up against injustice and inequalities, Spirou was chosen as a human rights champion of the UN Human Rights Office.

Gascon said the CHR hoped that the exhibit could also make its rounds in schools to reach more children and youth, and even government offices concerned with the defense of human rights.

The “Spirou4rights” project, he said, can also be replicated to feature local characters that are more familiar with the Filipino audience.

“It will be great if we have local comics, too, like Darna for rights, or Captain Barbell for rights or Lastikman for rights,” Gascon said. “We’re just, in a sense, scratching the surface. Hopefully, we can encourage more illustrators to lend a hand in promoting human rights using this medium.”