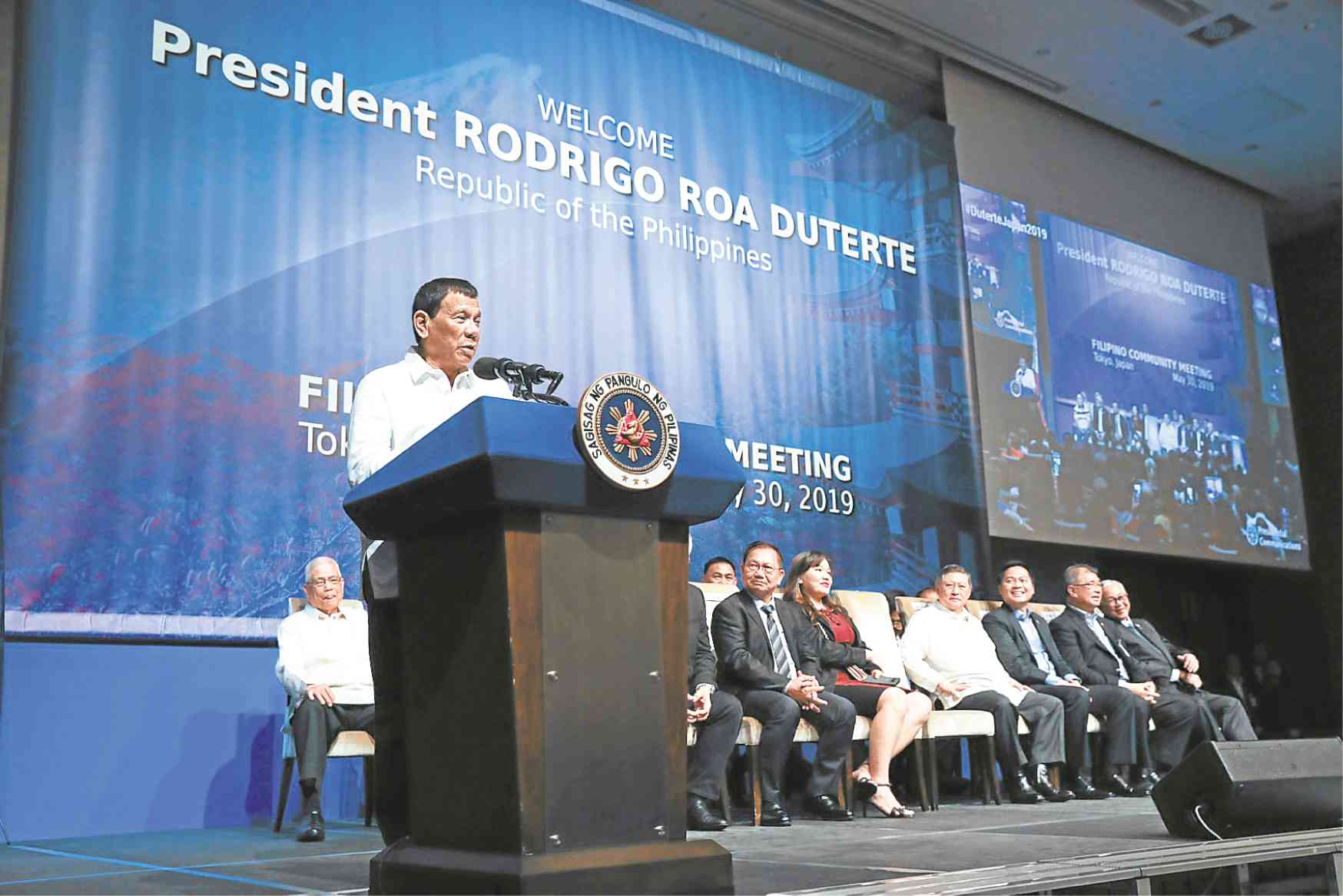 FEELING PLAYFUL BEFORE TURNING SERIOUS President Duterte banters with the Filipino community in Tokyo during his four-day working visit to Japan this week. But the President turned serious in a later speech at the 25th International Conference on the Future of Asia, confronting China’s extensive claims over the South China Sea and publicly denouncing Beijing’s aggressive stance in the region. —MALACAÑANG PHOTO

TOKYO—President Duterte on Friday said he loved China as an ally but questioned the claim by the Asian economic powerhouse over the whole South China Sea.

It was the first time that Duterte directly confronted China publicly on whether it had the right to claim the strategic waterway.

The President made the remarks in a speech at the 25th International Conference on the Future of Asia in Tokyo organized by Nikkei Inc.

“I love China,” he said. “it has helped us a bit. But it behooves upon us to ask: Is it right for a country to claim the whole ocean?”

Philippine defense and military officials have been wary of China’s aggressive actions in the South China Sea, particularly its expansion and militarization of the strategic waterway despite protests from other claimant nations.

China has built artificial islands on seven reefs claimed by the Philippines, turning them into virtual military outposts with runways for jet fighters, soldiers’ barracks and missile emplacements.

The President noted that the South China Sea was “at stress” but he assured China that the Philippines remained its friend.

He warned, however, that as long as the conflicting territorial and maritime claims remain unresolved between China and other countries over the waterway there would always be “a flashpoint for trouble.”

China and members of the Association of Southeast Asian Nations (Asean), which includes the Philippines, have been for years trying to craft a code of conduct in the South China Sea to prevent the overlapping maritime and territorial claims from escalating into violence.

China claims sovereignty over nearly the entire South China Sea, putting it in conflict with the Philippines, Vietnam, Malaysia, Taiwan and Brunei.

“Not only that, because of the absence of the [code of conduct], France, Britain, America are testing the waters,” Duterte added, jesting that it wasn’t to check the water temperature.

“My God, it is really testing who can fire the first shot. And I am sad and bewildered, not angry, because I cannot do anything,” he said.

Digressing, Mr. Duterte said “somebody should reach out to the United States because if you leave it to them to talk nothing will happen,” he said, referring to the trade war between the two countries and US naval freedom of navigation operations in the South China.

“There is so much animosity covered by sweet talking about how they desire to have an agreement. But nobody is pushing, and the intrusions [in the South China Sea], as far as China is concerned, [is that] it’s in their waters,” Duterte said.

The President highlighted his role as the moderator in the dialogue between China and Asean in the formulation of the code of conduct in the disputed waters.

“The last thing I heard was the [code of conduct] is just about two years away,” he said.

Duterte added that if given a chance to visit Beijing, he would talk to Chinese President Xi Jinping about the territorial dispute.

In his speech, the President also slammed the “lousy politicians in my country” who would like him, he said, to push the arbitral ruling “because we won.”

He was referring to the 2016 ruling by the international arbitral tribunal nullifying China’s expansives claims over the South China Sea.

That case filed against China by the Philippines under former President Benigno Aquino III frayed ties between the two countries. When Mr. Duterte took office, he set aside the ruling in exchange for warmer relations with Beijing and Chinese aid and investments.

“My country is very small. It has progressed a little over the years, I do not know why. But I cannot afford a war with anybody. Not only with China. And the moment I send out my Marines beyond 6 kilometers, they will be—they will all be wiped out in one or two military strikes,” he said.

Duterte said the Philippines was “deeply concerned about the ongoing trade war between the US and China.”

“It is creating uncertainty and tension. It is causing downward stressors on the global economy. It is becoming a protracted war on the global and trade investments everywhere,” the President warned.

He called for a resolution of the trade dispute as soon as possible.