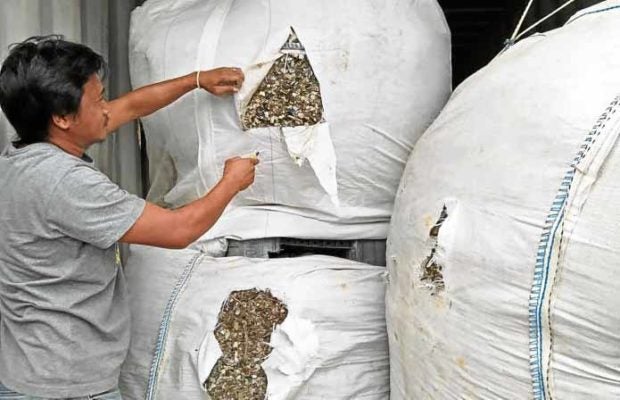 MANILA, Philippines — Besides sending tons of Canada’s trash back to Ottawa, Malacañang should also order the immediate return of garbage illegally shipped to the Philippines from Australia and Hong Kong, the chair of the House ecology committee said on Sunday.

Quirino Rep. Dakila Carlo Cua urged President Rodrigo Duterte to look into reports that port authorities intercepted a shipment of trash from Australia in early May and discovered another one last week that arrived in early January.

In a statement, Cua also said the Bureau of Customs should keep closer watch, as the discoveries indicated the Philippines had become a destination for foreign waste.

President Duterte last week ordered the hiring of a shipping company to return to Canada 37 containers of household trash illegally shipped to the Philippines in 2013 and 2014 after Ottawa missed a May 15 deadline for it to take the garbage back.

‘We’re sending the shit back’

“I hope the President can also look into reports of garbage coming from Australia and Hong Kong, and issue directives for their immediate return,” Cua said, citing news reports about the seizure of illegally shipped trash in Tagoloan, Misamis Oriental province.

“We’re sending the shit back,” Foreign Secretary Teodoro Locsin Jr. tweeted on Sunday, responding to a comment on television about the trash from Hong Kong.

Locsin said the Philippines would stop accepting foreign trash under the Duterte administration.

“It’s a native Filipino business. Or was until Duterte,” Locsin said.

Municipal waste was discovered last week in nine containers that arrived from Australia at Mindanao Container Terminal in Tagoloan on May 3.

The contents of the containers were reported as “processed engineered fuel” by the broker, reportedly the same company that handled tons of garbage shipped from South Korea last year.

Cement manufacturer Holcim Philippines Inc. imported the trash for use as incinerator fuel.

In a statement on May 23, Holcim said the central office of the Environment Management Bureau of the Department of Environment and Natural Resources (DENR) had cleared the importation and the use of the material as alternative fuel.

The company said the shipment was declared as a product that underwent processing before it arrived in the Philippines.

The Hong Kong trash — reportedly 25,610 kilos of crushed electronic materials — was discovered on May 22 before it could be claimed by the importer, Deputy Customs Collector for Northern Mindanao John Simon said on Saturday.

The cargo arrived on Jan. 2. It was shipped by Hin Yuen Tech. Env. Ltd. and was consigned to Crowd Win Industrial Ltd. of Pasay City.

“This is just a test cargo. They are just checking if it could pass through Customs. Fortunately, we were able to intercept it,” Simon said.

He said 70 more containers of the same kind of trash were to have followed had the customs bureau released the trial cargo.

A check by the Inquirer, however, found that the address was occupied by an eatery.

Simon said the customs bureau would order the trash shipped back to Hong Kong.

Misamis Oriental Rep. Juliette Uy on Saturday urged the government agencies concerned to take quick action against the shipment of foreign trash to the Philippines, calling it “an insult to all Filipinos and an affront to our laws.”

Earlier, the environmental activist group Greenpeace said the trash from Australia was “unacceptable, reprehensible and deplorable.”

Abigail Aguilar, campaigner for Greenpeace Southeast Asia-Philippines, said on Thursday that Holcim’s claim that the trash was intended for use as fuel “should be further scrutinized.”

The conversion of waste to energy is prohibited in the Philippines under the Clean Air Act and the Ecological Solid Waste Management Act, Aguilar said in a statement.

Environmental group EcoWaste Coalition expressed outrage over the shipment of Hong Kong trash to the Philippines.

In a statement issued on Friday, Aileen Lucero, EcoWaste national coordinator, said her group found it ironic that the shipment came from Hong Kong, “since China has taken the unprecedented move to protect its own environment by banning waste imports.”

“We therefore request the Chinese government to seriously look into this matter,” Lucero said.

She also called for the Philippines’ ratification of the amendment to the Basel ban on waste imports to protect the country from waste trafficking. —Reports from DJ Yap, Patricia Denise M. Chiu, Jigger J. Jerusalem and Inquirer Research