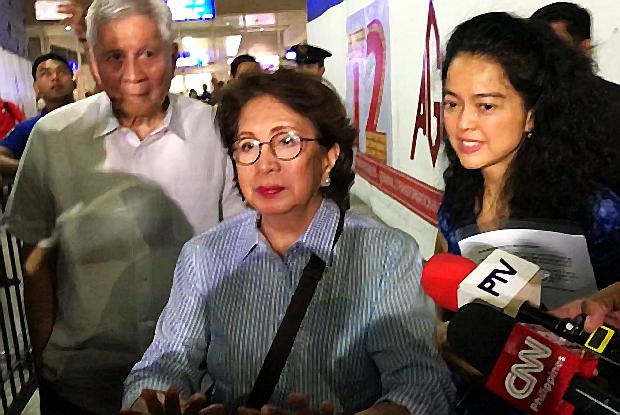 On her arrival at the Ninoy Aquino International Airport in the evening of the same day, she was asked about her plans following the incident, and she said: “That is something that I should reflect on. I am not saying anything, I’m not saying whether I am going to file any action nor I am not going to file action. Whatever action means.”

But she said the ordeal would not stop her from being vocal.

“I’ll be the same. I will be vocal in the same manner as I have been vocal before,” Morales said.

Not shocked, but disappointed

She said she neither “shocked” nor “awed‘ by the incident.

Continuing, partly in Filipino, she said “Of course, as a grandma, I was happy even on the plane and they were also delighted. So I’m happy [because] it was infectious. But then I wasn’t able to see them.”

Morales was visiting Hong Kong with her family for a vacation.

After being detained for four hours, authorities later said she could enter, but she declined and opted to fly back instead to the Philippines.

Morales back in Manila after being refused entry to Hong Kong

Morales eventually allowed to enter HK, but chooses to go back to Manila