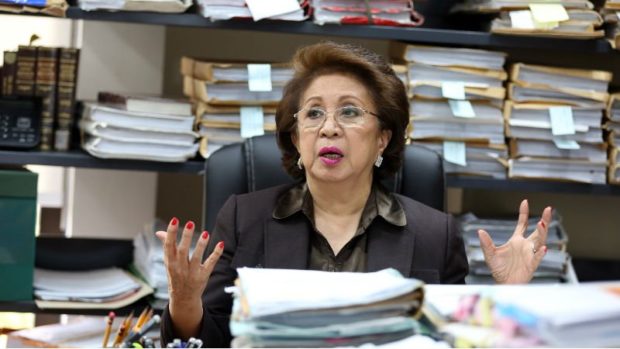 MANILA, Philippines — Former Ombudsman Conchita Carpio Morales called her “detention” in Hong Kong a form of bullying, referring to her being barred entry to the country on Tuesday afternoon.

“Yes, that was bullying. How do you call it if it’s not bullying?” she told reporters after arriving at the Ninoy Aquino International Airport later that day.

According to Morales, Hong Kong authorities told her she was being detained for “immigration reasons.”

The authorities refused, however, to explain the grounds of her four-hour detention.

“They did not tell me anything about it. “I was insisting that they give me the ground. They said nothing,” Morales said, partly in Filipino.

She was also asked to sign a document written in Tagalog. She asked for the English version of the document, on which she found out that she was under detention.

“I read it and then it said ‘detention,’ and of course, the detention I was thinking of was behind bars,” Morales said.

She was informed that she would be immediately deported to the Philippines aboard a Philippines Airlines flight at 6:00 p.m. that same day.

“When they asked me to sign the document, there were blanks. Not so many, but one of them was my flight. I refused to sing. I told them to fill up all the entries,” she said.

Morales also refused to accept the food that was offered to her.

After hours in detention, Morales was eventually allowed to enter Hong Kong. But she refused the offer.

“They said: ‘Now you can be allowed entry in Hong Kong.’ After what happened, they would do that to me?” she said.

Morales believes her detention was related to the case she and former Foreign Affairs Secretary Albert del Rosario filed last March at the International Criminal Court over the “atrocious actions of Chinese officials in the South China Sea and within Philippine territory.”

Morales was supposed to be in Hong Kong with her family for a vacation.