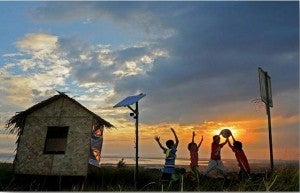 The DFA said  Reynaldo C. Mondez and Romeo B. Doneza  placed first and second in the competition with their entries titled “Solar Energy Panels” and “World Wide,” respectively.

Third prize went to Wong Chi-keung of Hong Kong for his entry “No Boundary Network.”

The DFA said in a press statement that Mondez and Doneza’s photos “stood out among the 204 submitted by 95 photographers from 17 Apec member-countries to best reflect Apec’s priorities of strengthening regional economic integration, advancing regulatory cooperation and promoting green growth.”

Mondez is a retired photographer of the National Housing Authority. He currently runs a small wedding photography business with his son in Metro Manila.

Two other Filipino photographers—Ellen de Leon and Robert Anton Pimentel— made it to the top 10  finalists with their entries “Winds of Change” and “Economic Harmony,” respectively.

Their pictures “stood out, based on the criteria for judging, which included the quality of the photograph, composition, overall impact, and artistic merit, as well as how it represents the three Apec themes.” 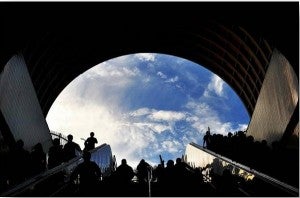 "World Wide" by Romeo B. Doneza

In a news release, the Apec secretariat quoted Mondez as saying he was “very happy and truly humbled by this experience.”

He had called his winning photo of children playing basketball next to a hut and a solar energy panel a “symbol of hope for a sustainable future, even in the most remote parts of the Philippines.”

Monde’s photo was taken in a “rural village in Rizal province.”

“What I am trying to convey to the world is to make renewable energy more accessible to everyone by first lowering the cost of technology. Through my photo, I hope to reach out to the decision-makers who are involved in renewable energy,” he added.

Read Next
Hillary Clinton to visit Thailand, Philippines
EDITORS' PICK
House energy committee chair Arroyo bats for cheap electricity
Honolulu Café is the cure for your Egg Tarts and Roastings cravings
Petition to reverse Comelec decision on Bongbong Marcos’ DQ case reaches SC
Luxe property: A way to build, preserve wealth
PH detects local transmission of Omicron subvariant BA.2.12.1
OVP: Pilot’s claim vs Robredo ‘never happened’, a ‘malicious fabrication’
MOST READ
Man posing as Marcos spox revealed to be an inmate in Bilibid — Guevarra
Heart Evangelista gets a ‘no’ from Chiz Escudero after asking, ‘Do I deserve a bag?’
Congress canvassing of votes for president, VP to begin May 24
3 Iloilo residents found with Omicron subvariant
Don't miss out on the latest news and information.