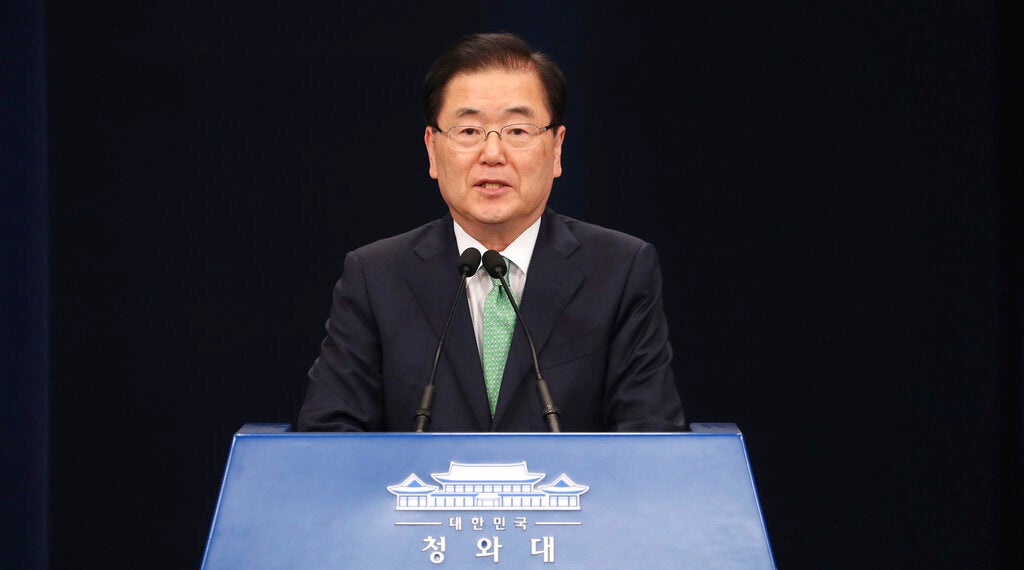 South Korean National Security Director Chung Eui-yong speaks during a briefing at the Presidential Blue House in Seoul, South Korea, Friday, May 17, 2019. Seoul and Abu Dhabi say that one South Korean and three Filipinos have been released following months of captivity in Libya. (Han sang-kyun/Yonhap via AP)

MANILA, Philippines — The Department of Foreign Affairs (DFA) on Saturday welcomed the release of three Filipino engineers who were held in captivity in Libya for 10 months.

The three unidentified Filipinos and a South Korean national were freed on Friday after being held captive by unnamed armed groups in Libya.

Their release was mediated by the United Arab Emirates, which worked with the Libyan National Army led by commander Khalifa Hifter.

“The Philippines welcomes the release of the three Filipino engineers who were taken by armed men from the project site of the Great Man-Made River Project in the southern part of Libya 10 months ago,” the DFA said in a statement.

“The Philippines deeply appreciates the efforts of the United Arab Emirates (UAE), Libya, South Korea, and other friendly countries that led to the release of the three Filipinos and their Korean colleague,” added the DFA.

“The Philippines looks forward to their return and their reunion with their loved ones.”

According to the UAE foreign ministry, the four hostages were civil engineers who were working at a desalination plant in Libya.

The ministry added that the four were airlifted to Abu Dhabi before being taken to their home countries.  (Editor: Mike U. Frialde)