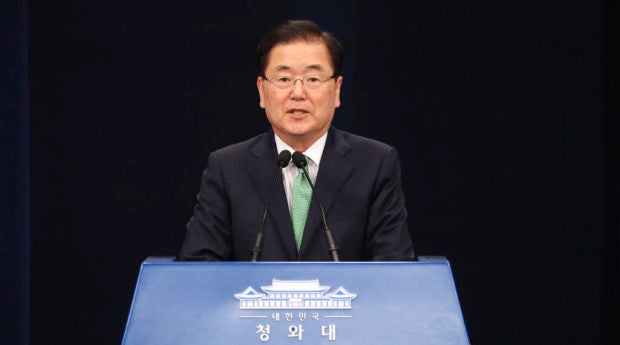 South Korean National Security Director Chung Eui-yong speaks during a briefing at the Presidential Blue House in Seoul, South Korea on May 17, 2019.  AP

The release of the hostages was mediated by the United Arab Emirates, which worked with the self-styled Libyan National Army led by commander Khalifa Hifter.

Since last month, Hifter’s forces have been battling in western Libya, trying to take the capital of Tripoli and have been locked in heavy fighting in and around the city with militias loosely allied with a UN-supported government. Several Arab countries, including the UAE and Egypt are backing Hifter.

The UAE’s foreign ministry said the four hostages, who were held captive by unnamed armed groups in Libya, have been released thanks to “intensive efforts” made by the UAE in coordination with Hifter’s forces.

The four are civilian engineers who were working at a desalination plant in Libya, the ministry said in a statement.

“Upon receiving requests from the Philippines and South Korea, the UAE communicated with the Libyan National Army to work on releasing them and to ensure their safety,” the statement said.

The UAE ministry said the four were airlifted to Abu Dhabi before being taken to their home countries.

Chung said the 62-year-old South Korean national surnamed Joo was freed after 315 days of captivity. An initial medical checkup showed Joo has no major health problems; he was to return home on Saturday.

Both UAE and South Korean announcements didn’t provide details about how the hostages were set free or which armed groups held them.

The pro-Hifter Al Marsad news website reported on Friday that the hostages were moved from one “criminal gang” to another before Hifter’s forces located and freed them. No other details were reported.