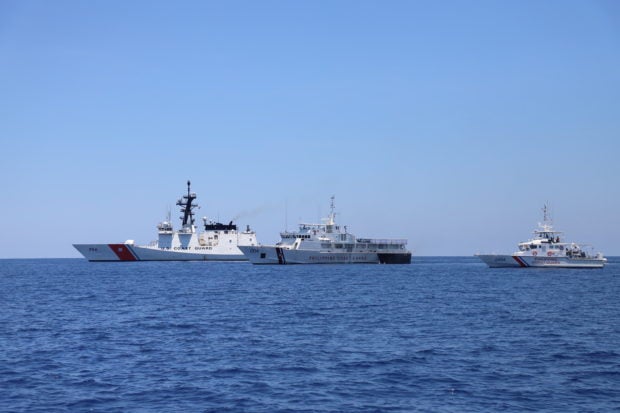 It was the first Philippine-US engagement of its kind in the disputed waters and likely a preview of the US Coast Guard’s bigger role in the WPS, known also as the South China Sea.

“The US has their capacity to conduct maritime law enforcement and maritime security, and the Philippines has its own set of protocols to do the same. By working together, we learn from each other and develop working harmony involving mutual interest of both countries,” said
Cdr. Gary Dale Gimotea, commanding officer of BRP Batangas.

Not far away, two Chinese coast guard vessels appeared to monitor the exercises. At one point, one of the Chinese ships got as close as 2.9 nautical miles from the BRP Batangas.

The Chinese vessels did not interact with the Philippine ship.

“They’re just trying to observe what we’re trying to do with the capability exercise involving the US Coast Guard,” Gimotea said.

He said they were not bothered by the presence of the Chinese ships during the exercises which Gimotea added were not aimed at them.

“We still continue to do what we need to do. We have a job to protect and we are not really concerned with what they are doing there as long as we are doing our mandate within the law,” he said.

“The coast guard is a humanitarian agency and is focused on saving lives. Almost all coast guards are one at sea and helping and keeping maritime security, maritime safety and environmental protection. It’s mutual interest between countries aimed at helping the people who
use our maritime environment,” he added.

Previously, China’s coast guard has been accused of blocking of Filipino fishing boats, consenting to Chinese illegal harvesting of clams at Scarborough Shoal, among other things.

The shoal was a site of a standoff in 2012 between Philippine and Chinese government vessels. Since then, China has enforced control of the area.

This prompted the Philippine government to take China to the international tribunal to invalidate the its excessive claims to the sea. While the ruling in 2016 was in favor of the Philippines, China refused to acknowledge it.

US Coast Guard steps up role in Indo-Pacific

The 418-ft USCGC Bertholf is set to make a port call in Manila on Wednesday, marking the first time that a US coast guard vessel would drop anchor at the Philippine capital for an official visit.

The presence of the US Coast Guard in the South China Sea signals a step up in its operations in the region and a shift from the usual navy deployments as a response to the rise of China.

“That is up to them to decide but that is a welcome activity in behalf of the Philippine Coast Guard,” Gimotea said when asked about the US Coast Guard’s increasing role in the region.

The ship is under the control of the US 7th Fleet for its Asia Pacific deployment, but is normally part of the Department of Homeland Security in the US.

The latest signal to China came just a few days after the navies of the Philippines, US, India and Japan conducted maritime cooperation drills in the South China Sea while en route to Singapore for the Asean Defense Ministers Meeting – Plus Maritime Security Exercise. (Editor: Cenon B. Bibe Jr.)