Palace: Canada to pay for cost of shipping out trash 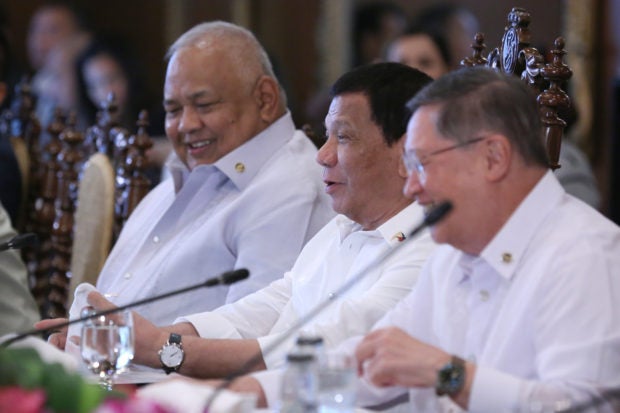 President Rodrigo Duterte talks ‘dirty’ during the 37th Cabinet Meeting on Monday night, May 6, 2019, when they discussed shipping out the tons of garbage that Canada illegally exported to the Philippines in 2013 and 2014. ALBERT ALCAIN / PRESIDENTIAL PHOTO

MANILA, Philippines — Canada will pay for all the expenses in shipping out the tons of garbage it illegally sent to the Philippines six years ago, Malacañang said Tuesday.

“On the issue of garbage from Canada, the DFA and the Department of Environment and Natural Resources noted that the Canadian government is committed to shouldering all the expenses to ship out all the 69 waste containers,” Presidential Spokesperson Salvador Panelo said in a statement.

The issue, Panelo said, was tackled during the Cabinet meeting in Malacañang on Monday night.

Between 2013 to 2014, the Bureau of Customs intercepted tons of containers of mixed garbage from Canada declared as “recyclable scrap plastics.”

President Rodrigo Duterte on April 22 threatened to declare war against Canada if it would not take back its trash.

“The President is firm that we are not garbage collectors, thus he ordered that the Philippines will no longer accept any waste from any country,” Panelo said.

Foreign Affairs Secretary Teodoro Locsin Jr. has said the tons of garbage would be shipped out to Canada on May 15. /cbb

READ: Canada’s trash shipped out by May 15