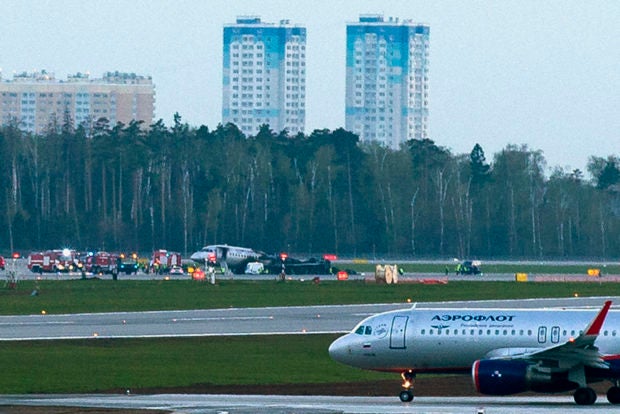 The Sukhoi SSJ100 aircraft of Aeroflot Airlines, center in the background, is seen after an emergency landing in Sheremetyevo airport in Moscow, Russia, Sunday, May 5, 2019. Scores of people died when the Aeroflot airliner burst into flames while making the emergency landing at the airport Sunday evening, officials said. AP

MANILA, Philippines — There were no Filipinos on the plane that crash-landed and burned in Moscow’s Sheremetyevo Airport over the weekend, the Department of Foreign Affairs (DFA) said Tuesday.

According to the DFA, the Philippine Embassy in Moscow reported that there were no Filipinos among the 76 passengers of the Aeroflot plane that caught fire after making an emergency landing. Forty-one people, including two children, died in the incident.

The DFA noted that apart from the 41 fatalities, 14 received outpatient treatment while nine were hospitalized.

“The Department of Foreign Affairs (DFA) extends its condolences to the victims of a passenger plane which caught fire after it made an emergency landing  in Moscow, Russia on 5 May 2019,” the DFA said in a statement.

Philippine Ambassador to Russia Carlos Sorreta said the embassy also extended its condolences to the Russian government after the crash, the DFA added.

Quoting a statement by Aeroflot, the DFA said the plane “suffered an engine fire after being forced to return to the Sheremetyevo Airport due to technical problems.” /cbb