Duterte: I will dump trash on Canada’s beaches 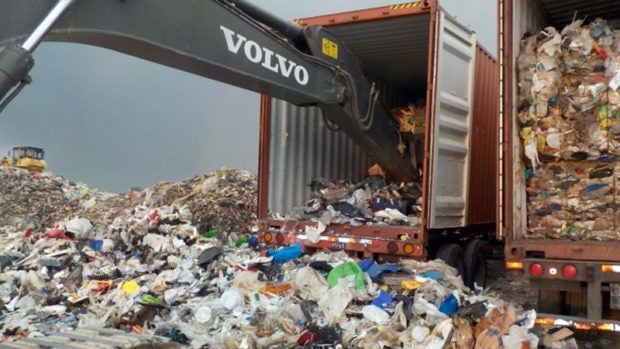 Heavy equipment is used to unload freight boxes containing trash from Canada at a sanitary landfill in this file photo from the Metro Clark Waste Management Corp. in Capas, Tarlac province. PHOTO COURTESY OF MCWMC

MANILA, Philippines – Barely a week after vowing to go to war with Canada over trash illegally dumped in the Philippines, President Duterte threatened to dump the garbage on Canada’s “beautiful beaches.”

Speaking before young athletes and their parents at the opening of the 2019 Palarong Pambansa in Davao City, the President said the country was not a dumpsite for other nations’ garbage.

He was reading from his prepared speech when he veered off-topic upon saying the words, “patriotic fervor.”

“Together, let us nurture the talents and patriotic fervor of our youth so that… See, patriotic fervor. There are about 200 containers there sent by Canada, we are being treated like a dumpsite,” Duterte said Sunday afternoon.

Recalling his threat to ship back Canada’s garbage himself, he added: “I will tell them to load it onto ships next week. If you don’t accept your garbage, I will dump it on your beautiful beaches.”

Last week, the President threatened to “wage war” on Canada if it would not retrieve containers of garbage shipped to Manila in 2013 and 2014.

Duterte vowed to sail to Canada to dump the trash himself, adding that he would dump five trucks of garbage at the Canadian embassy in Manila.

Canada vowed to resolve the matter amid a court order directing the importer to ship the trash back to Canada. Canada did not say when it would take back the garbage.

In response, Malacañang said Canada’s reply was “quick and vague” and “not appropriate.”

The Palace also stressed that the President’s demand was “non-negotiable” and that Canada’s inaction will endanger decades of bilateral relations with Manila.

On Sunday, Duterte reiterated that the Philippines was nobody’s garbage dump, and that Filipinos were not “scavengers” for other people’s trash.

“Do not… We are not a garbage dump. The Filipinos are not scavengers. And you do that to us as I am wont to do… I’m like this, I will really offend you,” the President added. /cbb

Read Next
Locsin to Pinoys in Libya: Evacuate to Philippine Embassy, I beg you
EDITORS' PICK
KWF has no power to ban, censor written works – Lagman
House energy committee chair Arroyo bats for cheap electricity
Powered by style, innovation and passion
A laptop that maximizes your WiFi so you can maximize your productivity
Why Tagle is a leading papal contender
In Borongan, nuns play hoops (not mahjong)
MOST READ
Why Tagle is a leading papal contender
Arjo Atayde reveals proposal to Maine Mendoza was ‘more than a year’ in the making
My neighbor FVR: From soldier to president
Gilas gets solid core with Clarkson, Sotto planing in
Don't miss out on the latest news and information.