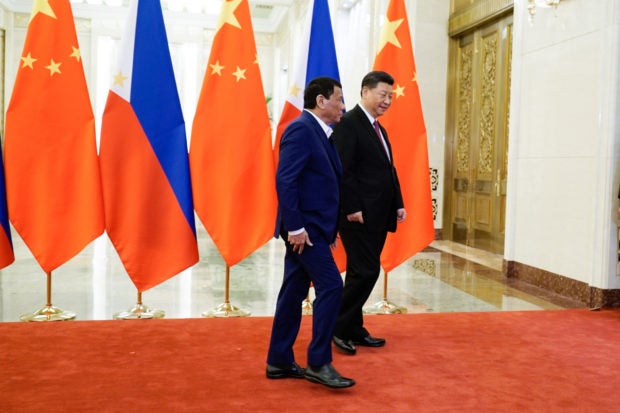 President Rodrigo Roa Duterte is accompanied by People’s Republic of China President Xi Jinping inside the Great Hall of the People in Beijing prior to their bilateral meeting on April 25, 2019. KING RODRIGUEZ/PRESIDENTIAL PHOTO

MANILA, Philippines — The presence of Chinese vessels in the West Philippine Sea were among the topics discussed in the bilateral meeting between the Philippines and China, Transportation Secretary Arthur Tugade said on Thursday.

President Rodrigo Duterte and Tugade are in China to attend the Belt and Road Forum with other Philippine government officials.

Asked if Duterte has addressed the issue of the presence of Chinese vessels in the West Philippine Sea (WPS), Tugade said it was among the topics discussed during Duterte’s meeting with Chinese President Xi Jinping.

(The issue was addressed during the bilateral meeting with President Xi Jinping where President Duterte said, “Treat us like an ally and we will remain your ally’.”]

Tugade said the meeting was pleasant, with the two nations vowing to strengthen their diplomatic ties.

(We had a pleasant dialogue where both nations vowed to strengthen its economic agreements and ties.]

Duterte has also called out China for building structures on Philippine-claimed reefs in the WPS but said he would stick to “talking” with Chinese leaders to avoid a military confrontation.

Duterte said he would negotiate with China and not resort to force to assert the country’s claims in the disputed waterway.