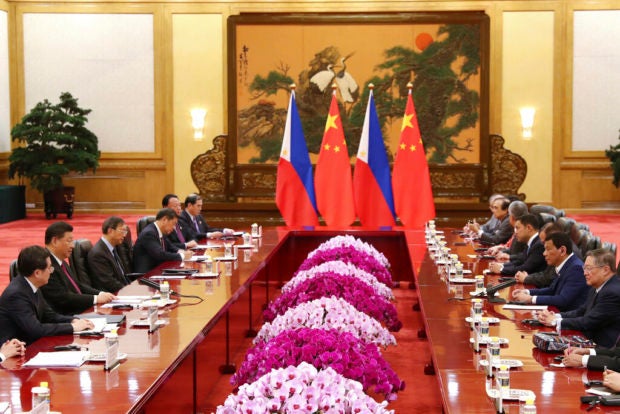 BEIJING – The Philippines and China have reaffirmed diplomatic ties notwithstanding heightened tension in the West Philippine Sea.

President Rodrigo Duterte vowed to flesh out “high-quality” and “good impact” projects with China as he sat down with China president Xi Jinping for a bilateral meeting on Thursday morning.

During their meeting at the Great Hall of the People, the two leaders also witnessed the signing of two bilateral agreements. The first was an exchange of commitment letters on production capacity and investment cooperation. This document proposes a project list which will serve as the focus of cooperation between the National Economic Development Authority (NEDA) and its counterpart in China, the National Development and Reform Commission (NDRC).

The leaders also witnessed the handover of China’s grant package for drug abuse treatment and rehabilitation centers in Sarangani and Agusan del Norte.

Mr. Duterte – one of the 35 heads of state who had flown in to China’s capital to attend the second Belt and Road Forum – said his participation at this forum “provides another opportunity to renew and reaffirm our valued relations based on mutual trust, respect, and friendship and must continue to grow strength and meaning in the coming years.”

For his part, Xi Jinping said during his opening statement at the bilateral meeting that he was happy to see Philippine-China relations “getting better and better.” He referred to Mr. Duterte as a “genuine” friend and “trusted partner.”

Xi Jinping said the Philippines was an important part of China’s Belt and Road Initiative, which he noted was similar to Mr. Dutertre’s infrastructure-building program.

He likewise expressed sympathy to the victims of a string of recent earthquakes in the Philippines.

This marks Mr. Duterte’s fourth visit to Beijing since winning the presidential election in 2016. His visit came on the heels of rising tension in the West Philippine Sea alongside some concerns on the so-called China “debt” trap relating to big-ticket infrastructure projects funded by China.

Bilateral relations between the Philippines and China have significantly improved under the Duterte regime. Recently, however, diplomatic tension has risen amid the swarming tactic employed by the Chinese maritime militia at Pag-asa Island—internationally known as Thitu Island— and the harvesting of giant clams by Chinese fishermen from that rich fishing ground in the West Philippine Sea, the waters within the country’s 370-kilometer exclusive economic zone.

Neither Duterte nor Xi Jinping mentioned the territorial dispute during their respective opening statements during the bilateral meeting. The discussion after the opening speech was no longer open for media coverage.

During his opening speech, Mr. Duterte said the Philippines and China “must continue to work together to explore new areas of cooperation and partnership.”

“The decision to elevate bilateral ties to a comprehensive, strategic cooperation affirms the Philippines and China’s strong desire to further deepen and broaden this engagement,” he said.

Mr. Duterte said the Philippines was keen on executing the projects hatched during Xi Jinping’s visit. The vision is to implement “high-quality and “good impact” projects. “The sooner they are completed, the sooner people on the ground will feel the benefits of Philippine-China relations,” he said.

In a separate bilateral meeting with China’s Prime Minister Li Kequiang early Thursday evening, Mr. Duterte echoed this “reaffirmation of friendship and understanding” with China in his opening remarks. “Our cooperation has expanded tremendously since I first visited China. And we envision a more comprehensive, strategic cooperation,” he said.

Li Kequiang said he’s happy to see Mr. Duterte again, noting how bilateral relations have made a U-turn for the better under his leadership. He said he was looking forward to working together with him to strengthen this relationship.