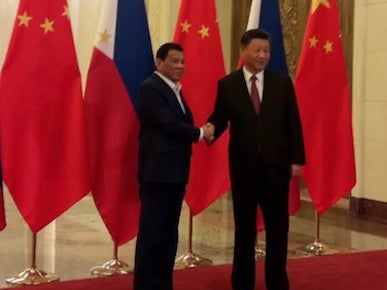 BEIJING — President Rodrigo Duterte has vowed to flesh out “high-quality” and “good impact” projects with China as he sat down with China president Xi Jinping for a bilateral meeting on Thursday morning.

President Duterte — one of the 35 heads of state who had flown in to China’s capital to attend the second Belt and Road Forum — said his participation at this forum “provides another opportunity to renew and reaffirm our valued relations based on mutual trust, respect, and friendship and must continue to grow strength and meaning in the coming years.”

This is Duterte’s fourth visit to Beijing since winning the presidential election in 2016. His visit was on the heels of heightened tension in the West Philippine Sea alongside some concerns on China-funded infrastructure projects and what some critics warn as a China “debt” trap.

At the opening of his bilateral meeting with Xi, Duterte greeted China on its 70th founding anniversary as well as on its economic achievements.

“The Philippine-China must continue to work together to explore new areas of cooperation and partnership. We look forward to a productive discussion on matters of mutual interest and concern,” he said.

Duterte said Xi’s visit to Manila in November marked a “watershed moment” in the Philippine-China ties.

“The decision to elevate bilateral ties to a comprehensive, strategic cooperation affirms the Philippines and China’s strong desire to further deepen and broaden this engagement,” he said.

Duterte said the Philippines was keen on executing the projects that were hatched during Xi’s visit to Manila last year. The vision is to implement “high-quality and good impact projects,” he stressed.

“The sooner they are completed, the sooner people on the ground will feel the benefits of Philippine-China relations,” he said.

For his part, Xi said during his opening statement that he was happy to see the Philippine-China relations “getting better and better.”

He said the Philippines was an important part of China’s Belt and Road Initiative, which he noted was similar to Dutertre’s infrastructure-building initiative.

China’s president also noted that he was treating Duterte as a “genuine” friend and “trusted partner.” He likewise, expressed sympathy to the victims of recent earthquakes in the Philippines. /jpv