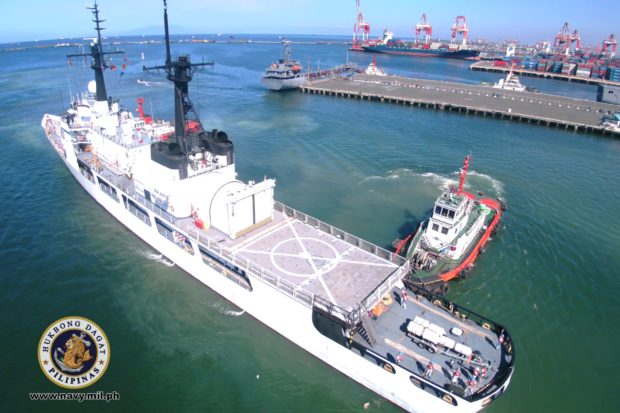 MANILA, Philippines — A Navy ship of Sri Lanka pulled into the Philippines for the first time since ties between Manila and Colombo were established almost six decades ago.

The ship known as P626, which docked in Manila on Thursday for a three-day goodwill visit, is homebound from Hawaii after its crew spent eight months there.

The vessel was a former Hamilton-class cutter Sherman (WHEC-270) of the US Coast Guard. It was transferred to Sri Lanka last August.

P626 of the Sri Lanka Navy is in Manila for a 4-day goodwill visit. This is their first Navy ship to visit the Philippines pic.twitter.com/XRMrVweJ1Z

Sports events, ship tours, and replenishment activities are set during the duration of the visit. Abeysinghe will also pay a courtesy call on Navy chief Vice Adm. Robert Empedrad.

The scheduled reception was canceled following the Eastern Day bombings in Sri Lanka that left more than 300 killed.

“Regrettably, as you are all are already aware of the present situation of Sri Lanka, we had to cancel some of planned events with the Philippine Navy in view of the mourning period declared in Sri Lanka at present. And I truly believe the things in my country would resume their normalcy as well as the peace would be returned very soon,” Abeysinghe said.

“We are hoping for the fastest resolve and capture of perpetrators and recovery of affected individuals,” he said.

Gagua said the visit underscores the continuing efforts to strengthen the relationship between the two governments and navies.

“This will enhance and sustain the promotion of peace, stability, and maritime cooperation through naval diplomacy,” he said.

Abyesinghe stressed the similarities of both navies: “We both share similar objectives in defending our waters and more or less the similar sphere of threats and challenges in the discharge of our duties to our nations.”

“Both our countries are benefited with largest areas of exclusive economic zone compared to the land area of our countries, in our case it’s almost 26 times of our land area,” he added.

The two nations are also facing threats of rebellion and illegal drugs: “I understand the Philippine Navy is also fighting a similar threat in the south of your country. Above all, both our navies have prioritized our fight against narcotics and human smuggling in the recent past.”

He said they could also exchange training on technical support for the similar ships they have with their Philippine Navy counterpart.

P626, which has yet to be officially named by the Sri Lanka Navy, will stop over in Singapore after its Manila visit. It is expected to arrive in Colombo by the second week of May.  /je