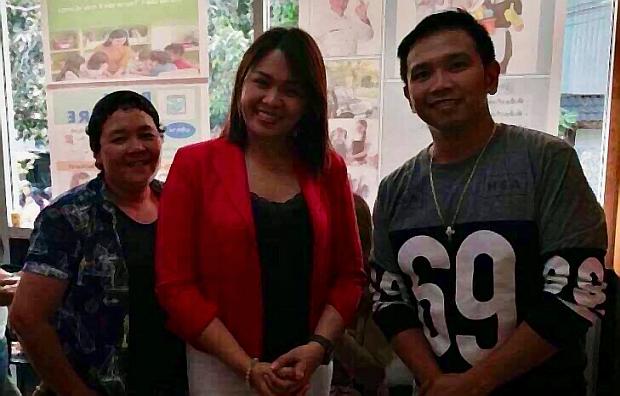 The three suspects in the fraud case are (from left) Emily Fabe, Ronygene Atregenio, and Ernest Rey Basilio Salarza. Fabe and Atregenio remain at large. Salarza was arrested in Thailand on Tuesday, April 23, 2019/ (Contributed photo)

BANGKOK, Thailand — Like most Filipino workers, Melinda (not her real name) arrived in Thailand from Dubai in August 2018 as a tourist. She was also tourist in Dubai. Unable to find work, she tried Thailand upon the prodding of friends who are already working in Bangkok as nannies and teachers.

“I was looking for an agency that would provide me a work permit. I joined the SWD Group because I saw from their posts job advertisements promising work permits,” Aira wrote in an email.

“SWD posted about the BestCare Provider. Since I just arrived in Bangkok, I was in a hurry to get a job. I inquired about it. Trusting that SWD would really help me, I started saving to pay for the Work Permit which amounted to thirty-eight thousand baht [$1,186],” Melinda said.

On Jan. 9, 2019, Melinda paid 21,500 baht to Ronygene Esmeralda Atregenio, the manager of the Best Care Provider. Aside from the bank transfer, Melinda also paid in cash.

Melinda exited in Vientianne, Laos, to apply for Non-B (working) visa in January in the hope that she would soon start working upon returning to Thailand. A visa application usually takes two days to process, while a work permit application takes two to three weeks.

Melinda never received her work permit. She could not contact Atregenio. Rhey Kheen communicated to her and identified himself as the co-owner of BestCare Provider and offered help. Still, no work permit was provided despite her having paid the required amount.

Aira flew to Hong Kong without any documents. She was supposed to process her Non-B visa after paying 20,000 baht to Atregenio. She paid another 10,000 baht before her flight because another agent, a certain “Aylene” promised that the documents are “to follow.”

After two weeks in Hong Kong, no documents were sent. Aira went back to Thailand.

“Atregenio only processed my Non-B, after I threatened her that I will complaint to Tulfo,” Aira said.

A working visa or Non-B in Thailand is only for 90 days. To be able to extend it to one year, the visa holder must provide a work permit and other necessary documents to the Immigration office of the province where he or she will work.

Both Aira and Melinda learned that there were at least 30 Filipinos duped by BestCare Provider and its cohorts.

This falls under Thailand’s Computer Crimes Act. The complainants allegedly paid 33,000 to 38,000 baht each in exchange for a work permit.

On April 23, 2019, Rhey Keen Ayala — whose real name is Ernest Rey Basilio Salarza — was arrested by the Thai police in a rented apartment unit at Victory Monument.

He is currently detained at Klongthan Police Station and a 100,000-baht bail has been set for his temporary liberty. Fabe and Atregenio are still at large.

Popular in his Facebook Pages as the “lalaking nahulugan ng durian,” Rhey is the administrator of SWD Kapamilya Thailand, SWD Kapamilya, and Pinoy Adobo Thailand.

Emily Fabe is also the co-administrator of these groups.

Salarza, or Rhey Keen, has been working in Thailand since 2012. Before his arrest, he was a part-time teacher at Saint Andrews International School in Sukhumvit 107.

Fabe had worked as a nanny in Bangkok. She was also one of the “graduates” of the UN Open University scam in Bangkok in 2017.

Both Salarza and Fabe are known Duterte supporters and leaders in Thailand.

On Dec. 1, 2018, Salarza, Fabe, and other DDS group members had a meeting with the Presidential Communications Operations Office (PCOO), headed by Secretary Martin Andanar, who introduced to the group the administration’s flagship programs.

Ronygene Atregenio — also known as Nokie and Caroline Maxime — is allegedly the owner and manager of the Best Care Provider, a recruitment company with an office at the 3rd floor of Summer Hill on  Sukhumwit Road Prakanong in Bangkok.

However, in its Facebook post on March 4, the firm announced that its office was temporarily located in Onnut, Bangkok.

The company website describes its goal as follows: “to provide families and business entities with the help that they need from nannies, caregivers and other staffing requirements may it be full time or on-demand circumstances. We understand the difficulty of finding the right employees or household help while trying to be focused on the more important details of everyday living. We are here to help our clients in finding the perfect candidates by matching with their requirements. Every candidate went through thorough interviews and screening to ensure their qualification. Our office is located in Bangkok, Thailand but we also provide assistance to Southeast Asia, the Middle East and other parts of the world.”

A source privy to the company told this reporter that Best Care was not allowed to provide the work permit of the applicant.

On March 8, Atregenio already left Thailand before the warrant was served. The borders and airports have already been alerted.

Despite the strict labor laws in Thailand, many Filipinos are unaware of their labor rights mainly because they entered the kingdom as tourists and upon employment were given Non-B, or working, visas and work permits.