DFA to Libya OFWs: Leave now before it's too late... | Global News

DFA to Libya OFWs: Leave now before it’s too late… 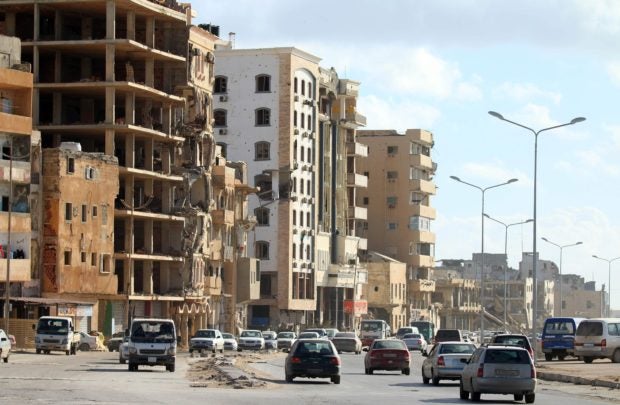 ESCALATION Cars drive past heavily damaged buildings in Libya’s eastern city of Benghazi on April 8. The Philippine government urged some 1,000 Filipino workers in and around the Libyan capital of Tripoli to consider getting themselves repatriated as another civil war erupted in the north African country. —AFP

MANILA, Philippines – Chargé d’Affaires Elmer Cato on Thursday renewed his appeal to overseas Filipino workers (OFWs) in Libya to have themselves repatriated since doing so once Alert Level 4 is raised would pose more challenges and obstacles.

The Department of Labor and Employment (DOLE) has raised Alert Level 3 in Tripoli and its nearby districts amid the rising tensions near the country’s capital.

Cato said a good number of OFWs still opted to stay even with DFA’s efforts to transfer them to areas of safety or have them repatriated for free.

“While we can be expected to do everything we possibly can to lead our people out of harm’s way, we can only do so much. We cannot force those who want to stay to go with us,” Cato told INQUIRER.net in a message on Twitter.

Foreign affairs secretary Teodoro Locsin Jr. has also said that said that there were no forced evacuations and repatriations in Libya, as the OFWs themselves have the final decision.

Despite this, Cato said he is confident that OFWs would seek to be repatriated once Alert Level 4, which entails forced evacuation, is raised.

“When we raise the Alert Level to IV, our people themselves would know it’s time to go because their lives would already be in serious danger and that it would be really difficult for us to do anything anymore to help them if they choose to stay,” Cato said.

Asked if there are any indications if Alert Level 4 will be raised any time soon, Cato said that they will immediately recommend it to DOLE if deemed necessary.

On Wednesday night, Cato announced that the first batch of OFWs to be repatriated have been evacuated from Tripoli to Tunis.

Once in Tunis, they will be flown to the Philippines.

Cato said DFA shoulders airfare and meals of repatriated Filipinos, as well as accommodation as they await their flight back home.

“Upon arrival in the Philippines they can avail themselves of assistance extended by DOLE,” Cato said. /gsg