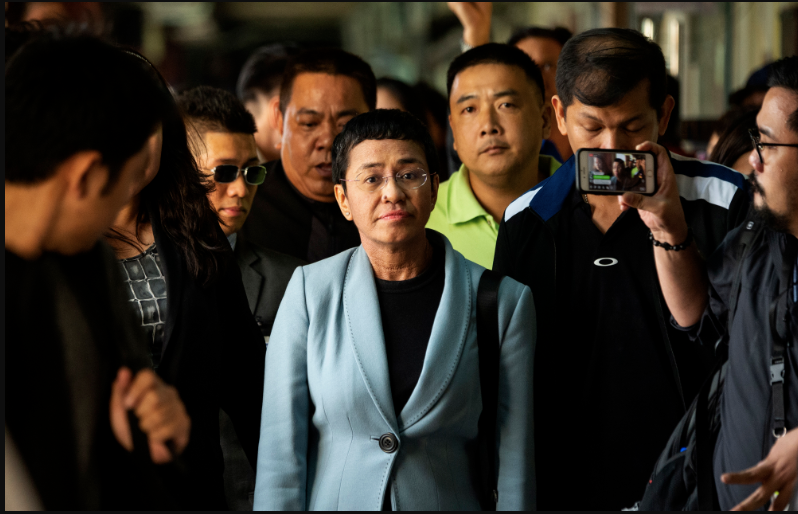 Philippine journalist Maria Ressa (C) arrives at a regional trial court in Manila to post bail on February 14, 2019. Ressa was freed on bail on February 14 following an arrest that sparked international censure and allegations she is being targeted over her news site’s criticism of President Rodrigo Duterte. (Photo by Noel CELIS / AFP)

MANLA, Philippines — Filipino veteran journalist Maria Ressa has been named among Time Magazine’s “100 Most Influential People in the World” this year.

The list released by Time Magazine late Wednesday included an article for Ressa written by former US Secretary of State Madeleine Albright, describing the Filipino journalist as someone who “remains undaunted.”

“Around the world, a new generation of authoritarian leaders is leading a concerted and intentional assault on truth, with serious consequences for journalists such as Maria who are committed to exposing corruption, documenting abuse and combatting misinformation,” Albright wrote.

“Maria’s Manila-based news site, Rappler, has already been indicted by President Duterte’s government on questionable tax-evasion charges, and Maria was arrested and briefly imprisoned earlier this year for allegedly violating a dubious ‘cyber-libel’ law. But Maria remains undaunted,” she added.

READ: IN THE KNOW: Cases against Maria Ressa

Albright also recalled the time when she presented Ressa with the National Democratic Institute’s highest honor back in 2017.

“She spoke of the hard work and courage of her colleagues at Rappler: ‘We are journalists, and we will not be intimidated. We will shine the light. We will hold the line.’ That is precisely what she has done,” Albright said.

Time Magazine has previously named Ressa as its 2018 Person of the Year alongside other journalists.

“Soon after learning that she was one of a group of journalists being honored by TIME as Person of the Year in 2018, Filipino reporter Maria Ressa had a startling realization—she was the only one of the honorees who was not either dead, a recent survivor of a deadly attack or imprisoned. She has since been arrested and released on bail multiple times,” Albright further wrote. /kga