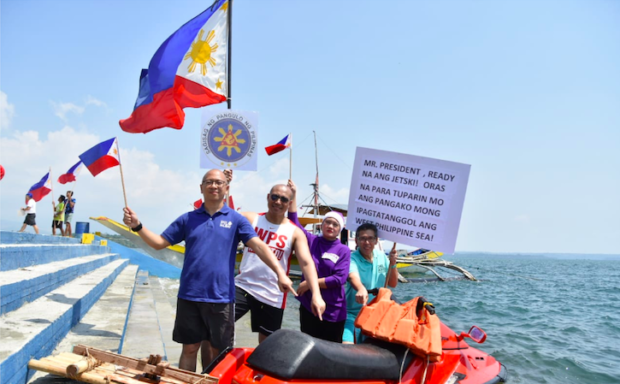 Members of the opposition demand action from the government on China’s incursion in Philippine territories in the West Philippine Sea. PHOTO FROM OTSO DIRETSO

MANILA, Philippines — Foreign Affairs Secretary Teodoro Locsin Jr. bared his idea of drafting into the military “critics of the administration” and sending them to the West Philippine Sea (WPS) to “test the waters” against Chinese forces in the disputed territory.

Locsin made the statement when prompted by former Comelec commissioner Gregorio Larrazabal about the reported presence of Chinese vessels near the Philippine-occupied Kota (Loaita Island) and Panata (Lankiam Cay) Islands in the WPS in March and early April.

“What do you want us to do about it? I am preparing the draft of all critics of the administration,” Locsin said in a tweet Wednesday night.

“We are sending them in first to test the waters. No loss, all gain in tactical knowledge,” Locsin added.

What do you want us to do about it? I am preparing the draft of all critics of the administration. We are sending them in first to test the waters. No loss, all gain in tactical knowledge. https://t.co/DRvdspD9Sd

In a related tweet, the Foreign Affairs secretary said he was thinking of sending the critics to “lead the attack.”

Such rashness will more certainly lead to a worst result. Meanwhile I am thinking of a military draft of critics of our foreign policy to lead the attack and test the waters. No loss much gain think you not? https://t.co/NccElQQDIU

Locsin in a separate Twitter post, said he was not against war, calling it a form of “cleansing”.

“I know but all it takes is for one navy vessel of ours however small to be sunk to trigger the Mutual Defense Treaty and all out war,” Locsin said, responding to a netizen who said that Philippines’ fight in the West Philippine Sea is about its “dignity as a sovereign nation” rather than simply protecting its physical resources.

I know but all it takes is for one navy vessel of ours however small to be sunk to trigger the Mutual Defense Treaty and all out war. After which we can all afford to buy real estate in Makati. https://t.co/q8Rwex9R9o

“Don’t get me wrong, I don’t mind a war. It is cleansing,” Locsin said in another tweet.

On March 1, US Secretary of State Mike Pompeo in his visit to Manila said the US government’s “commitments” under the US-Philippines Mutual Defense Treaty (MDT) “are clear, our obligations are real, the South China Sea is certainly part of an important body of water for freedom of navigation.”

Following Pompeo’s reassurance of the treaty, Locsin said the government was “assured” and “confident” on the guarantees that US has given the Philippines in relation to the protection of Philippine interests in the South China Sea. /cbb