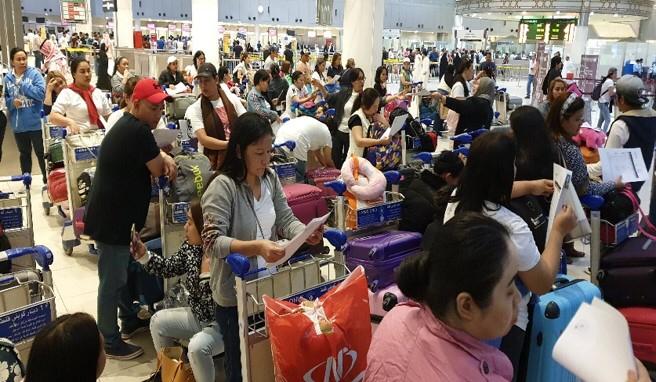 In a statement, DFA said the Filipino workers, who arrived in the Philippines on April 11, were assisted under the Embassy Assisted Repatriation Program (EARP) for distressed Filipinos abroad.

According to DFA, EARP is a joint program of the Philippine Embassy in Kuwait, and the Illegal Residency Monitoring and Immigration Departments of Kuwait’s Ministry of Interior.

The said program “aims to repatriate overseas Filipinos who were charged with absconding and expired visa cases at the Immigration Department, without having to be detained.”

DFA added the Philippine Embassy in Kuwait also assisted the medical repatriation of Ruwina Mercadal, who was aided and monitored by the embassy’s Assistance to Nationals Unit-Medical Response Team while she was being treated in the hospital.

DFA said the Philippine Embassy in Kuwait has already repatriated a total of 88 Filipino workers in February and March this year. /kga

Read Next
Palace: US could have stopped China in South China Sea
EDITORS' PICK
Cherry Mobile teams up with Cloud Panda PH, launches online store
Someone from the Philippines can become $356 Million richer this Tuesday
Philippines’ COVID-19 cases accelerate to 18,638
Duterte certifies as urgent anti-terror bill
Leveling up your ‘lutong bahay’ with the kitchen companion you never knew you needed
‘Puno na lahat:’ Metro workers brave lack of public transport, rains on Day 1 of GCQ
MOST READ
‘If I had not been SolGen, I will make you eat your words,’ Calida tells Coco Martin
BFP raises general alarm over Mandaluyong fire
51 percent of German firms holding back investments in PH, but not because of COVID-19
5 car dealership outlets shutting down
Don't miss out on the latest news and information.