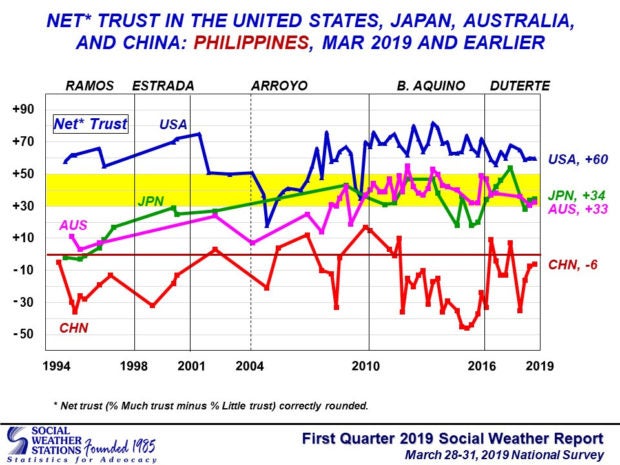 The pollster said that the United States’ rating was similar to its previous one in December 2018 while the rating for China was up by a point.

According to the SWS, the United States’ rating “has been positive since SWS first surveyed it in December 1994.”

For China, the SWS said its rating “has been positive in only 9 out of 49 surveys since SWS first surveyed it in August 1994.”

According to the SWS, Japan’s rating was at +34 while the rating for Australia was at +33.

The SWS said it asked respondents this question:

(Let’s now talk about some countries. For the following, please indicate if your trust/faith in (country) is: Very much; somewhat much; undecided if much or little; somewhat little; very little; or you have not heard or read anything about the (country) ever? You may indicate your answers by placing each card on the appropriate box on this rating board. /gsg