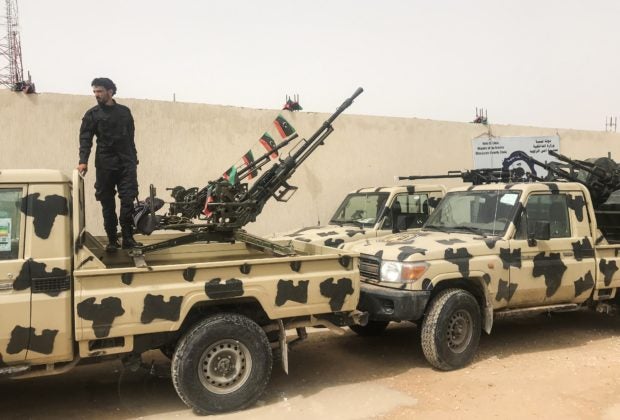 A local militiaman, belonging to a group opposed to Libyan strongman Khalifa Haftar, stands on an armoured vehicle the group said they seized from Haftar’s forces at one of their bases in the coastal town of Zawiya, west of Tripoli on April 5, 2019, hours after Haftar’s forces were pushed back from a key checkpoint less than 30 kilometers (18 miles) from Tripoli, according to security source said.  (Photo by Mahmud TURKIA / AFP)

MANILA, Philippines — The Department of Foreign Affairs (DFA) on Monday declared several districts in Libya under Alert Level III amid the escalating violence in the country.

In a tweet, Foreign Affairs Secretary Teodoro Locsin Jr. said the alert level was not for the whole country, but only for the country’s capital, Tripoli, and its “adjacent districts plus a 100-kilometer radius.”

@elmer_cato @BBCNews @DFAPHL and I have raised the alert level in Libya to 3 but only for Tripoli and adjacent districts plus a 100 km radius.

Under Alert Level III, which is considered a “voluntary repatriation” phase, Filipinos working in the specified areas but are currently in the Philippines will not be allowed to travel back to the country “until the situation in the country stabilizes, and the alert level is lowered back to II.”

The DFA urged Filipinos in the said areas to move to safer areas and observe extreme caution amid the continuing tensions near the capital.

“The Department said the Embassy will remain open to respond to requests for assistance from Filipinos who might be affected by the fighting,” DFA said in an advisory.

There are 1,000 Filipinos in Tripoli and its surrounding areas, according to DFA estimates. /ee